I had a great time in DC this past weekend. The Global Prayer Gathering was phenomenal. I was really unsure about it to begin with, but it ended up being one of the best experiences I've had in a while.

It started with the rather long eight or nine hour drive up from Dayton, which we did in three 15 passenger vans + a minivan. There were 47 of us, and when we got to the two day pre-conference event for students, we made up more than half of the people who were there.

Then the actual conference started though, and there were 1000 other people. And they were mostly really cool people too. It all kicked off with a formal banquet Friday night, which was awesome. The next day the actual "prayer gathering" started, in which we broke up into smaller groups of 30 to 100 and went to rooms dedicated to specific countries to spend 45 minutes or so praying together about issues there (IJM, which hosts the gathering, deals mainly with human trafficking, sexual abuse, and forced labor in developing countries). 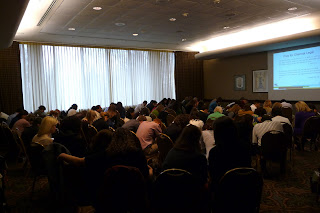 I have to admit that I was a little apprehensive that this was going to be either really boring or really weird, but it turned out to be neither, and I definitely came away with a much bigger appreciation for the global church and prayer in general (and a slight desire to go to law school....)

The last night we went to a great French restaurant, where I had a really good cappuccino, as seen below: The event was in Tyson's Corner, which is just across the Potomac from the actual Capital, and since there were several people in our group who had never seen it before, we decided to go into the mall that night. It was the second time I'd been there at night, which is always breathtaking (or at least it has been the now two times that I've seen it). Below is the Lincoln Memorial, and a couple friends... 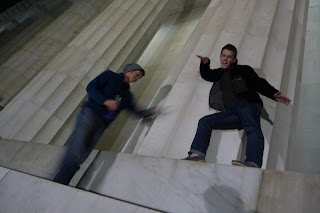 Sounds Great! Remember to show me your souveiners :)