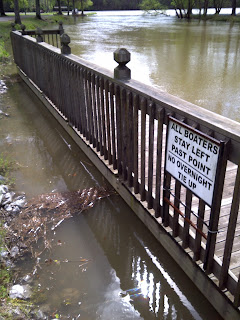 Yesterday it rained from two in the afternoon until two am this morning, so things are still a bit soggy. There was also a pretty serious lightning storm, but we didn't get any tornadoes as they did in other places, and as far as I know, the power didn't go out like it did a couple times last week.

This morning I walked down into Dayton to buy some things that I had run out of... like toothpaste. Bryan is on a hill, so it drys out quite quickly and never floods. Down in the valley was another story though, as you can see to the left.

I know I could have probably found some one to ride down with (like the five or six Bryan people I ran into at Harmony House) but for some reason I felt like a walk this morning instead of sleeping in.

It was probably because I'm still in a pattern of waking up earlier from the GPG conference... which I don't really mind. I'm afraid that I'm actually very slowly becoming a morning person, which I thought would never happen. It used to be that I couldn't think until after like one or two in the afternoon, and my best hours were from about 11pm to one in the morning. All this semester though, I've been waking up early enough to eat breakfast at the cafeteria and doing most of my study there. Of course, considering that I've been doing rather poorly in my study-intensive classes this semester, it might be that I would be better off going back to my late night routine. But for some reason I just don't feel like it anymore. Last night I could barely stay up past midnight, even though I new I had nothing to do this morning.

So anyhow, it wasn't a terrible week, which is always good. I had a lot to catch up on from being gone at the conference toward the beginning, and then a I had to spend a lot of time working on a video project for Triangle but that was okay. We also had our last formal cabinet meeting, which got a little out of hand (there were literally people throwing things... it was on video, so if it gets up I'll post it) but I kind of enjoyed it. So hopefully next week won't be bad either.

hmmm, I like getting up early in the spring and summer, while not so much in the other half of the year. Glad the end of the semester is coming!