Sky Falls and It Feels Like a Beautiful Day 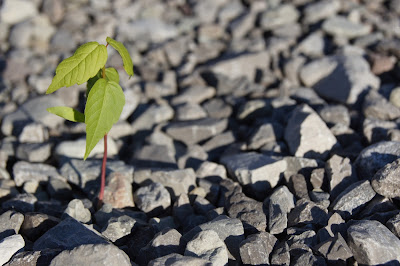 "The heart is abloom. It shoots up through the stony ground." - U2

All of yesterday and last night, the Southern US (as I'm sure you've probably heard by now) was slammed by what is now being called the worst storm cluster in the region's history. We had four separate tornado warnings over the course of the day starting around nine in the morning and lasting well into the night. Miraculously, the campus didn't get anything but some rain and an amazing lightning show that evening. Many people around us were not so lucky. The storm's death toll is now approaching 300 and six of those deaths occurred last night on Dayton Mountain, just ten or fifteen miles from campus.

This afternoon, Daniel Jackson, another Triangle staff writer, ran into me and said he thought we should go up to Dayton Mountain and try to get some photos, and possibly interviews for our online edition of the paper (the print edition was cancelled due to the printing house losing all power from the storm). Providentially, my new camera (a Sony a55 ) had just arrived in the mail this morning and it seemed like this would be a good opportunity to use it. So after gearing up and paying someone an extortionate amount of money to use their car, we headed up the steep road onto Dayton Mountain. 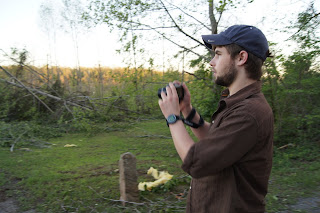 We were going on only vague directions, and I felt like we would be fortunate if we found a few downed limbs to take a picture of. This was, after all, the same storm that had passed harmlessly over us on campus just a few miles to the east. So I was in no way prepared when we ran into scene after scene like this: 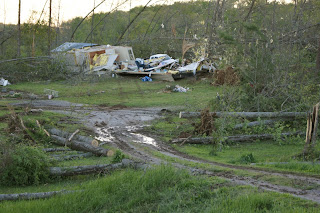 There was one area in which what I would guess was about five acres of trees had been completely stripped of branches and snapped off at the middle. The trees that were left standing were tangled with thousands of plastic bags and mangled telephone and electric lines. We passed at least one road that was still being blocked off by the authorities, and one man that we ran into said that it was even worse further up the mountain.

So in the end I was glad the we decided to go, although it's sobering to think that these were people's homes, and that some of these people were in them when they were destroyed.
Posted by Andrew at 4/28/2011 11:10:00 PM

Wow! I wonder if it was just one tornado or several that got the area.

but there's no room, no space to rent in this town-at least not on that mountain....what a terrible scene!