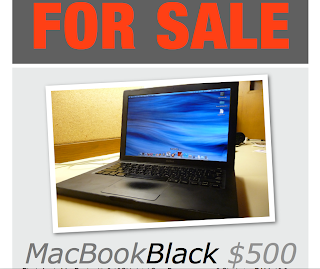 Today I said goodbye to a dear old friend: my very first mac, and really, the first computer that belonged to me. I was a bit sad to see it go, after all, we'd been through a lot together: a harddrive change, a RAM upgrade, backpacking around Europe, rendering 3D animations, processing countless Gigabytes of video, three and a half years of college, and all the papers a BA degree entails, World of Warcraft, work, trade-shows, another trip to Europe, this time involving a 24 hour HD video editing marathon on illegally obtained software which we finished fifteen minutes before our deadline, and during which we had to import video for other teams as well because it was the only computer with FireWire.

Safe to say, my MacBook was a pretty big part of my life for the last almost four years, and I felt a little tinge of sadness parting with it. The good news is though, it's not dead, just passed on to someone else. And I was even able to get a good bit more than I thought for it. Being as old as it is, I was only thinking I might get a couple hundred for it, but after researching what they are going for online, and even talking with someone who works for Apple, I discovered that macbooks, and this model in particular, have a remarkably high resale value. So in the end I had no trouble selling it for $500. In fact, the demand was such that if I had ten more of them right now, I'm fairly certain I could sell them all on campus for the same price without a problem. People were practically fighting to get it from me!

glad you got a good price for it! If you ever reinstall WoW it took 48 hours on our internet for it to download lol! (but it had to get all the BC, WOTLK, CATA etc. etc.)

Yeah, I remember it took about 14 hours the last time reinstalled it, and it just keeps getting bigger because they're always updating it.

how much ram does your new one have? and how much storage?

4GB RAM and 500GB hardrive. The main thing though is that it has a quad-core processor, which basically means that it's like four processors strapped together all working at the same time.

and it also has a discrete graphics processor which is something that our iMacs have but my old MacBook didn't that makes it able to run games with better graphics.

Amazing! I can sense it will handle movie making with ease!