It's been a kind of strange week. I was working on several projects for school and the Triangle (which I guess is technically school too, but doesn't really feel like it). Atop that, I had a two day trip to Atlanta in the middle of the week to meet with the mission agency I'll be working with this summer. One of the projects I finished just before I left was this little piece that I did of "Barbarian Wars," a campus event that they do every spring here. The video is cheesy, but then, considering that the event consists of people in cardboard armor attacking each other with eggs while music from Gladiator

plays in the background, I decided that to try and have the video not be cheesy would be journalistic dishonesty ;) 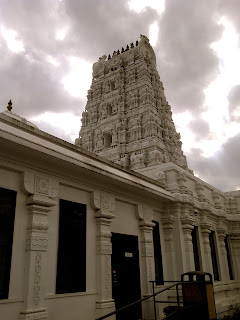 While in Atlanta, our group also visited a Hindu Temple and a Mosque, where we spent a couple hours talking to a representative from some Islamic group in Atlanta. Both were interesting. I was a little disoriented on the way back though, as I kept thinking of how while I had obviously completely disagreed with both of them, neither had disturbed or offended me as much as the church I visited last Sunday. At first I wondered if that was a problem.... but I now I think it probably isn't. I may just have an overdeveloped sense of irony.
Posted by Andrew at 3/25/2011 05:07:00 PM

I liked the video. I saw it on the Triangle website, and I thought it was pretty well done. :)

Thanks, glad you enjoyed it :)

Awesome! I should scratch together a horde and do this on my B-day lol!