The Boundaries of Language 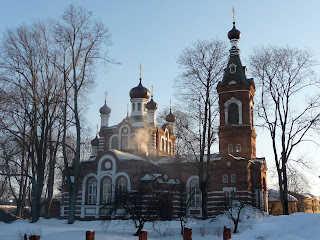 It's been quite the experience so far. On Monday morning we went into the schools. This was relatively intimidating at first, since we were basically set up in front of a class of Latvian students with the general direction to answer questions about America and try to help them improve their English. The first class was kind of tough, as the students weren't very talkative. It all improved from there, and by the third class I was actually starting to enjoy it.

That afternoon the kids arrived at the church to start the film project. I was teamed up with Steve, a film major from Bryan, to work on a movie for a group of 15 year old Latvian girls. The way it is supposed to work is the kids write a script and then we help them turn it into a movie. The girls, however, only had a vague idea what they wanted to do, so I soon found myself in the middle of the sanctuary surrounded by five or six fifteen year old girls chattering in Latvian and and questionable English and typing down ideas to try to come up with a coherent story. It was definitely one of those surreal "Is this really happening?" experiences. 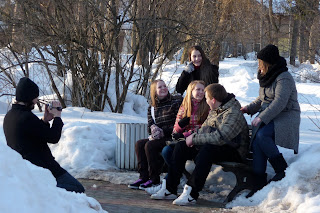 Today we got our first real start on filming, which was fun, although the girls kept changing things that they wanted to do. It looks like the rest of the filming won't be done till tomorrow night when we have an appointment to come to one of the girl's teacher's house to film something.

The living situation has been a bit of an adventure so far. I've only had one [cold] shower so far since we left the U.S, and the room we all sleep in is heated by a fireplace, which I would be used to from home, except that it only holds enough wood to last for about 45 minutes. So as an alternative to waking up every 45 minutes, I've gotten used to sleeping in about as many clothes as I wear in the day time. 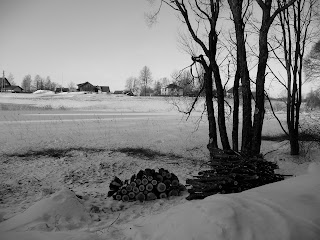 Today after we got done with filming I took a walk around Limbažu and looked at some of the old churches and things, which are beautiful. It was then that I took most of these pictures. 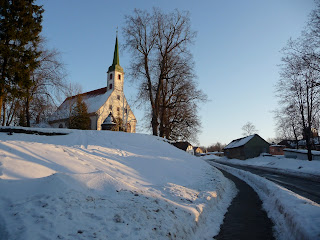 Tomorrow we will hopefully finish up filming. Thursday we are supposed to take a break and travel around the country a bit. There are several people in the group who feel like we are all behind on the filming and should skip the travel day to get done with the editing. I kind of agree with this, but at the same time I was really looking forward to seeing some parts of the country outside Limbaži and Riga, so it will be interesting to see what conclusion is come to.
Posted by Andrew at 3/08/2011 02:03:00 PM

I knew IT! I KNEW IT! That you are cold that is. :) Sounds great otherwise and I hope you do get to see more of your surroundings after all.

Sounds great! (All except the cold shower of which i've experienced probably one to many times) The scenery is beautiful! Looks a lot like here with all that snow. Have fun! (And learn some Latvian) -Maryah

I LOVE the first picture. Gorgeous.

Whenever things are bit crazy just mutter a happy slip style "dishashter" to yourself lol!