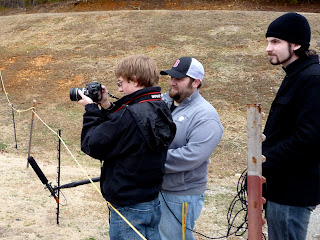 After my last class at three today I went down to Rudd Auditorium to meet with some of the people I'll be going to Latvia with in a little over a month.

We decided that we would film a documentary sort of thing to introduce ourselves/show what Bryan College looks like (the teams have been going for five or six years now, and as far as we know, none of them have ever done this).

One of our leaders, T.K. had just bought this awesome new canon 60D and a boom mic, so it was really fun to play around with that stuff, even if we did look a little awkward trailing around campus with all of it.

Interesting story - after they had filmed my introduction and I was showing 'them' around the cafeteria on the video tour, this guy completely tripped and fell on his face right in front of the camera. It looked pretty natural, but we kind of suspected he had done it on purpose. That night I had a class with him asked about it, and he did in fact mean to do it. We kept the take, so I wonder what the kids in Limbaži will think when they see it?

I seem to be miraculously done with my homework for the week. That's good though, because tomorrow I have to try and catch up on my story for Triangle this week. I haven't really worked on it at all yet. Speaking of that though, my two stories that I've written so far are live now, so if you're at all interested, they are here and here.
Posted by Andrew at 2/04/2011 12:56:00 AM

Really good articles! Do people actually subscribe to the paper, or is it just a free pick-me-up sort of thing?

Everyone gets it in their mailbox (whether they want it or not ;)

That is classic with the guy tripping on purpose right in front of the camera!! Haha...Crazy person.

So you are a junk mail service? just kidding!

Your articles are fun to read and well-written! The Sonlight people would be very proud. :)

Thank you for the introduction to Wylio. That's really nice.