Grass Skirts and Such 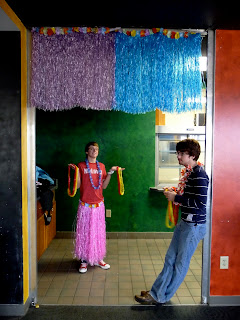 This past Saturday my Break for Change team had its long awaited fundraiser breakfast. We had originally planned to do a Christmas themed pancake breakfast, but after poor planning, procrastination, and losing our Santa costume to a school play, we decided to postpone the idea until this semester. The obvious problem then was that we could no longer have a Christmas theme, because it was now February. Fortunately, someone had the bright idea to go in the complete opposite direction and do a Hawaiian themed breakfast, with banana pancakes, pineapple pancakes, blueberry pancakes (which is not really Hawaiian, but they were delicious anyways), and several other things.

This time we made sure that we actually planned it out and advertised, and we were expecting at least 20 to 30 people to show. When we opened at 8:30, we weren't expecting anyone to be there that early, but a whole crowed came, and kept coming. By the time it was over, we had served somewhere around 70 people, which is a lot more than we were expecting.

I somehow got appointed the unofficial liaison between the our group and the cafeteria, and because of the extra people, I had to make four or five unplanned trips to stock up on fruit and coffee and things like that, which was tiring, but fine as we made about twice as much money as I had estimated we would. 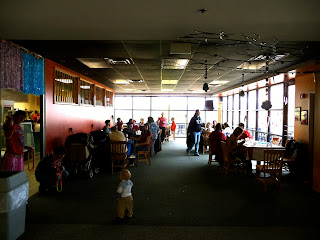 The next day I was feeling tired from the fundraiser and kind of depressed (for reasons unrelated to the fundraiser) and decided not to go to church. I also had no intention of going to watch the superbowl either, but over lunch, my friend Steve, who will be coming with me to Latvia, invited me to a party near Chattanooga.

I didn't really watch much of the game, because I was working on homework, but early that afternoon, I played three extremely intense games of ultimate frisbee. I had a number of collisions, almost dislocated my shoulder, and am still sore from it today. It was fun though, and I'm glad I ended up going.

PS. I feel like this post should include some kind of tribute to Brian Jacques, one of my favorite authors from my early teens, who passed away a few days ago. It's been a number or years since I read the Redwall series though, so I'm not sure what I'd write, but I felt I should at least mention him.
Posted by Andrew at 2/08/2011 10:16:00 PM

The fundraiser was great! Lauren and I really did enjoy it. We hope the best for you and the rest of the team headed to Latvia.

Also, I loved Brian Jacques too. I was sad to hear that he passed. Redwall was a huge foundation in my childhood as I learned to love to read.

They say he died from an aortic aneurysm. Glad your fundraiser went well!