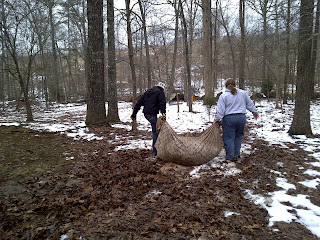 Rather than taking MLK Day off, Bryan has a rather long tradition of making it into a community service day where students go out in teams and spend most of the day helping people and organizations in the local community.

Last year, I was sadly unable to participate, and ended up having an experience that  held some parallels to most descriptions I've heard of the zombie apocalypse.

This year fortunately, I had no such problems and spent the better part of the day raking leaves in Cleavland Tennessee my Break for Change Team. It was complicated by the fact that much of the ground was still covered with snow, and that which wasn't snowy was still extremely wet. It ended up working okay, although I was rather muddy by the end of the day.

That night I was feeling extremely tired, and questioning the wisdom of what I had just done while still technically recovering from strep and the flu. I also spent some time questioning if I should go to the first meeting for the school newspaper. I had wanted to join last semester, but told myself (and the editor & chief) that I couldn't because I was taking 19 credits. Now it's this semester, and I'm taking 19 credits again... so I really have the same dilemma. It's something that I have felt like I should do though, and this is my last chance to do it while my friend Katie is still editor, so in a way, I feel like it's now or never. So last night, I psyched myself up and went to the meeting.

I was the only new person joining the staff, everyone else having stayed on from last semester, so I couldn't help but feel a little intimidated. I am, after all, the new guy stepping into the workings of a team that's been together for awhile. Katie had said something to me about just coming and checking it out to see if I liked it, but comfortable or not, I somehow ended up with an assignment, and a person to interview, and a deadline. So it will be interesting to see how this turns out.
Posted by Andrew at 1/18/2011 10:10:00 PM

Oh Andrew. Always up for a challenge, eh?

Nice. Hope you enjoy working with the team. I think you will be a great addition to the newspaper. Can't wait to read what you write.

Reading about last years MLK day does make this one sound like a party!