A Place In New York 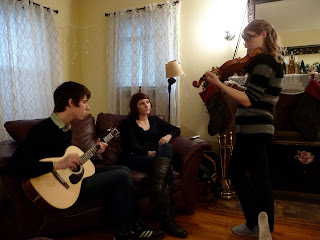 Yesterday I was able to go down to Queens to see a few oldish friends of mine, Pete, Amanda, and Hannah Wells. I met all three of them at SBI and hadn't seen them since, so it was really great to catch them while they were, at least relatively speaking, close. Pete and Amanda, who are the main part of the band The Perennials

are leaving for England tomorrow to start a tour or Europe, which I hope will be great for them. 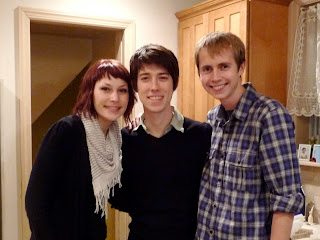 I spent the afternoon at a house of a friend of theirs, and that evening listened to them play a show for some of their friend's friends. There ended up being thirty or forty people there, all from the Queens area, and it was cool to meet all of them. I've never known anyone from NYC before, which was probably the main reason I so seldom go there. That may change though, as I had several people invite me to come down for a weekend sometime.

The show was great. I was amazed to hear how much both of their skill has improved since playing with Pete back in the day. If you're at all interested in their music, you can check out their myspace page here.
Posted by Andrew at 1/03/2011 11:29:00 PM