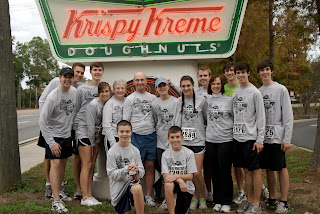 This evening is my last night in Tallahassee, where I spent my Thanksgiving break this year with my cousins. I had a kind of rough trip down, but my time here has been great. It began with the Turkey Trot Thanksgiving morning, which my Uncle had been trying to get me to run in again ever since my whole family spent Thanksgiving here several years ago. That was the first race I had ever run, and I was looking forward to hopefully getting a better time this year. It was a huge race, with over 5000 people showing up for the entire event, and running in that big a crowd was a different experience for me. As it turned out, I did get a better time, 23:17 as opposed to 24:12 back in 2006. I was a bit disappointed by this, as this Spring I got a 22:something in the Bob Bridgman, which is a significantly harder course. Still, for not having trained much this semester, I felt ok about it. I also beat my Uncle, which is something I could not say before. After the race was over, we all, in accordance with tradition, went to Krispy Kreme, thus, the picture above. 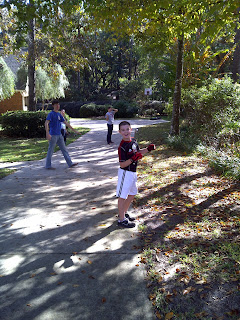 Aside from running, I played a lot of other sports with my cousins, and their other cousins, which was fun. Left is a picture of us playing "Rolly Bat" a sport that I have never heard of anywhere else, but is a favorite of my cousins here. 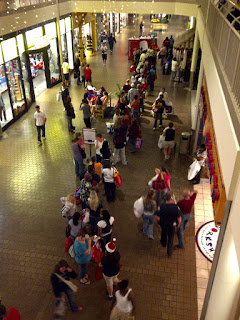 After all this, I was pretty tired and sore, but still decided to go out with everyone at 4:00AM on Black Friday. I had never been black Friday shopping before, and it was an experience. We went to Walmart, Target, Starbucks (the first place that I actually bought something), Sears, Macys, several stores in the mall, Atlanta Bread CO. and several stores in another outlet before finally bringing the day to an end. It was fun to do once, but I'm not sure if I will do it again. 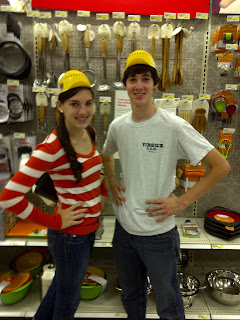 Left are Abby and Jordan at Target, where we weren't able to buy anything because of the line that literally stretched all the way around the store.

Speaking of new experiences, I went to my first college football game today. My Uncle's brother-in-law somehow new someone who was able to get Jordan and I tickets even though the game was only two days away (not to mention it was the Gators-Seminoles game which was their biggest rivalry game of the year). It was pretty crazy, but a lot of fun... especially since FSU won by an unexpectedly high margin. 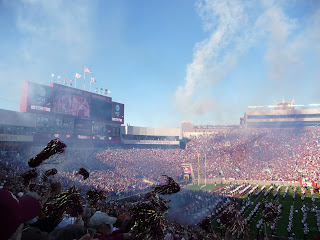 Tomorrow morning I'm heading back to Tennessee to buckle down for two and a half more weeks of classes. I suppose I can't expect it to go better than the rest of this semester has, but it's a short enough time now that I think I can buckle down and get through it.
Posted by Andrew at 11/27/2010 11:09:00 PM

Hey Drew! What great pics! They make me homesick for Tallahassee though and especially you! What made the smoke in the stadium picture? That is award winning I think.

They had just set off some fireworks and the smoke was blowing that way.

I've got few blogs myself, but I just started a new one that I'm really excited about. It's called Top My Blog and it's a community based blog that let's other bloggers submit and share their blogs with other users.
Here's a link: Top My Blog

I really think your site is awesome and hope that you'll submit.