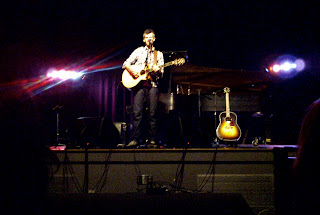 This evening I meandered down to Rudd Auditorium and ended up listening to Shaun Groves. I've been familiar with Groves' music for a long time, and while I didn't dislike it, it seemed to be the kind of thing that my local Christian radio station played... a genre I had tried to escape from ever since I started buying my own music. Still, when I found out in Chapel that he was on campus, I couldn't resist the urge to go down this evening and check it out. I must say he was very good. Not quite my style (rather far from it actually) but very enjoyable to listen to none-the-less. He also had an awesome stage presence, which never hurts.

During the concert he was encouraging people to sponsor children through compassion international. That's something I always thought would be a rather difficult sell on a college campus, but it seemed like there was a fair amount of interest. It made me think back years to the very first concert I ever went to... Rebecca St. James... and how my family started sponsoring a girl in Ethiopia as a result.

It seems like I've been encountered by lot's of missions-oriented things lately, both at school and from pastors and ministries that I've listened to for a long time. It could be because right now I'm on the verge of doing some things that could be classified as "missions", and so I'm sensitive to it. Or perhaps there is just a bigger movement toward it in the Church in general right now... which wouldn't be a bad thing in my opinion.

Speaking of ministry and the Church... I was thinking the other day about both of them. I want to help people, yet at the same time, my experience with the Church has honestly left me far less than inspired to try and spread it. I know that's a problem, but it's just where I am. I started to think that maybe because I've become so cynical I really have no business doing anything related to ministry or aid or anything like that. But then I had to ask myself the question: Is that really a good reason not to do it? Does not feeling like my heart is in the right place mean I need to wait for it to be? I think I've spent most of my life since I was a little kid feeling like this and thinking that I had to wait until I felt differently before I did anything. I think I could easily wait my entire life telling myself that someday I will "feel right". Should I risk spending my whole life waiting for that? Even as the cynic that I may be, I'm starting to think that I shouldn't.
Posted by Andrew at 11/08/2010 11:12:00 PM

You're right... he's good.
I wasn't able to attend the concert tonight, but I was pleasantly surprised in chapel.

I ended up sponsoring a precious little boy named Arun. I'm so, so excited.

I've been meaning to sponsor a child since the summer, when I read The Hole in the Gospel (which isn't at all blasphemous, despite the title). But I've been making excuses, mainly because I'm afraid I'll overdraw my bank account. But you know what? I think that sometimes you just have to go for it, and everything else will follow. That's why it's called a leap of faith, right?

And despite the problems in our individual churches, and even the universal church, I still think that the image of the church can be redeemed, especially in light of movements pushing social justice. We're founded in the strength of Jesus, man :)

That's great that you sponsored one! Congratulations :)

Sounds like an interesting book. I'm glad that it isn't blasphemous, because I might want to read it sometime.