It was a pretty good weekend. Friday night I went to yet another rugby game; this one between the current rugby team and returning alumni who had been on the team. Saturday I went to the homecoming game, which at Bryan is a soccer game. We won 5-0, which was good. That night there was a bonfire and the Little Foxes played. They are basically a Bryan College version of the Grecian Urns (see Lovedream

) a band led by a guy who goes here. It was their last show, as all the members either have graduated or will graduate this December. Sunday I did nothing all day but fill out applications and complete a rather massive amount of homework. I ended up reflecting a bit on things that if I could go back, I could have done differently or more efficiently in my whole academic experience since high school that would have made things easier (perhaps better?) than they are now. But it's really too late to do anything about... so that was a little depressing. Other than that it was really a good weekend. Here are some pictures from our excellent homecoming game: 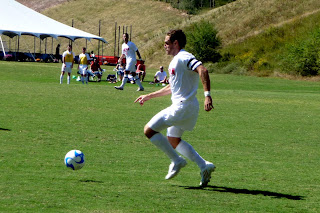 Above is Harry, our star defensive player from England (our soccer team is almost entirely imported by the way... since Bryan doesn't do football, they seem to spend the difference on soccer). Below is Rasheed (sp?), who almost always tries to head the ball. It's great when it works, but sometimes it doesn't. 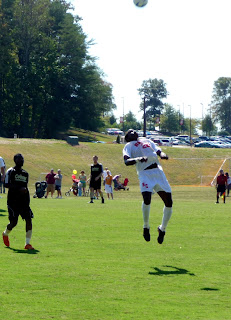 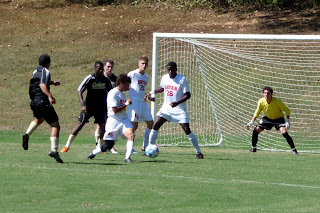 Spanish and Algebra, and OT Lit to some extent, are all getting pretty intense. I'm kind of glad fall break is just a week away. There is a chance I may be going to see Malcolm Gladwell, the author/journalist I mentioned a few posts ago tomorrow night, which would be awesome. I'll let you know if it happens.
Posted by Andrew at 10/04/2010 05:54:00 PM