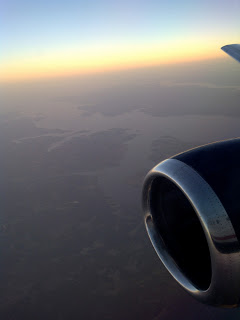 I had an excellent trip home from Tennessee yesterday. I was worried it might be a rough, as I had three connecting flights, and two of them without much space in between, but it ended up going very smoothly, and I met some interesting people along the way.

After parking in Chattanooga, I was told by the man at the check-in counter that my first flight was running half an hour behind, which could be a problem since I only had one hour to make my connection in Charlotte. While waiting at my gate I ran into Dr. Turner, one of my professors from Bryan, who was headed out West. So I said hi to him before we boarded our flight, which ended up being only fifteen minutes late, giving me a completely reasonable forty-five minutes to find my gate in Charlotte. The plane, an older turbo-prop model, was kind of a puddle-jumper, and Turner made some remark about the wings being held on by duct-tape. It got us there fine though.

I wanted Starbucks and in the terminal at Charlotte there is seriously a Starbucks about every fifty feet. Sadly, though, I had to walk about a mile to get to my next gate, and by the time I arrived, there wasn't time to wait in line for coffee before boarding.

The flight was to Philly, and I ended up sitting next to a guy who was headed to Tel Aviv. He asked where I was going, and I asked him some things about Israel, and the book he was reading in Hebrew. His name was Adi, and when we landed in Philly we ended up hanging out for a while. We went outside for a bit, and while we were standing on the sidewalk I asked him about the political/military situation in his country. It turned out that while he is not on business trips in the US, he is a soldier with the IDF and he took out his phone and started showing me all these pictures of patrolling the Gaza Strip and the Jordanian border and lots of other places. He asked me about the military in our country and if I knew anyone who was in Iraq (I don't right now, but I have several friends who have been). I also asked him about Iran, and he gave me his opinion on that. So really, flying back was almost worth it just for that.

We went back in through security again and headed to our next flights, mine to Elmira NY, and his to Tel Aviv Israel. It was at this point that I was asked for about the 5th time by security people about the book I am currently finishing up: The Girl Who Kicked the Hornet's Nest

. It seemed like almost everyone I ran into was either reading the series, or wondered what I thought of it. I will probably finish it in the next couple days, but now I almost want to carry it back with me just because it's such a good conversation starter.

Flying out of Philly was really beautiful. I never really think about how big cities are until I see all their lights lit up at night, and Philly did not disappoint. When I finally got in at Elmira at around 10:30, my entire family met me once I walked out of security, which I wasn't really expecting. Sanna ran up and started hugging my legs so I could barely walk, and we all went out to the car and headed home.
Posted by Andrew at 10/11/2010 12:45:00 AM

Hey, that sounds wonderful!
That guy going to Tel Aviv sounds pretty cool...
I've only flown once myself, and loved it, but I might be nervous if it was just me all alone, especially if there were connection flights.
I'm glad you made it home okay! And who was it that hugged your legs? A little sister or something?

haha, yes, I guess I should have made that more clear. She is about five.