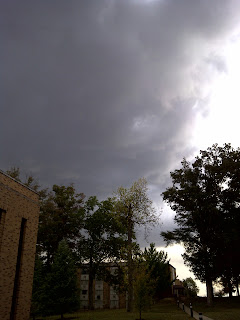 I realize that my last post ended with a bit of a cliff hanger, me being stranded in an airport terminal 100 miles from my destination and all. I also realize that I then neglected to ever post what happened. So sorry. I did make it back, but then I was too busy to post for the first few days. After that, nothing interesting enough to inspire a post happened for the rest of the week.We did have a close one today though. Well, it wasn't actually that close, but it was exciting.

This morning I woke up to very strange weather. The wind was blowing hard, and the sky was overcast, and it looked like it should be a crisp late October day. But when I stepped outside, it was a balmy 75 degrees. The sky started looking stranger and stranger as the day progressed, and by mid-afternoon the alert went out on campus that a tornado had touched down in Rhea County, and we were under a warning.

In the end we didn't get a tornado anywhere near the college, but the sky looked pretty spectacular. Around seven, it started looking like we might finally be in for something, and I decided to go for a walk around Bryan drive with my camera and see if there was anything interesting. It started raining a bit, and I ducked into the Library just as the wind picked up and torrential sheets of rain commenced to pound the building for more than half an hour.

While I was trapped in the Library, I decided to start reading Civilization and Its Discontents again, even though I had decided to stop before because I felt it was contributing to an overall sense to depression that I was experiencing. Somehow, reading it up in the library with lighting flashing all up and down the valley and rain and leaves driving against the giant glass windows beside me was an experience unto itself, and not really a depressing one. 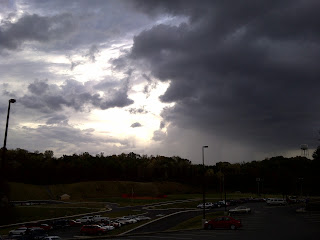 That sure sounds exciting! Here in KS, tornados are pretty common and I've actually got to witness 1 tornado and come close to several others. Each time, I run outside till mom calls me back in. :-)