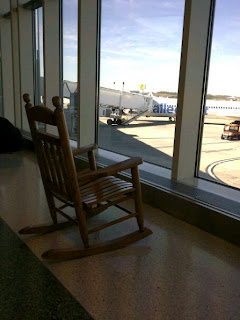 So, according to the plan, I was supposed to be back in my room on Woodlee 2nd Short making up for only getting three hours of sleep last night. That was the plan.

My parents dropped me off at Elmira Airport at five this morning. My flight which was supposed to depart at 6:20 didn't even board until 6:30, and by the time we got to Detroit I was already about thirty minutes late. That would have been workable if I ran fast, but then there was some regulatory confusion with them not letting us get off the plane for ten minutes after we landed even after everything was in place for us to do so. Safe to say, I missed my connection.

The next flight to Chat wasn't until 5:30am the next morning, so I was going to have to wait around all day, go to a hotel, and then show up again at like four. Instead I asked if they could put me on a plane to Knoxville, which they did. So hear I am blogging from the Knoxville terminal. I have a friend coming to pick me up, which is great, but I still have to figure out how I can get back to Chattanooga to get my car this week. So anyhow, I guess it could have been worse.
Posted by Andrew at 10/17/2010 03:59:00 PM

I'm so sorry for you! Hope everything works out for you! I'll be praying for you!