The Cliffs of Insanity

I don't follow professional sports at all, and never used to pay that much attention to college sports. This semester however, I have been unable to ignore them. There is, you see, a relatively strong rivalry between Bryan College and Covenant College, a slightly bigger and significantly richer school on the mountain above Chattanooga. Since time immemorial (or at least long before I transferred here) this rivalry has been perhaps the primary dynamic animating the campus. In the latest episode, things, at least in the opinion of some, got way out of hand. 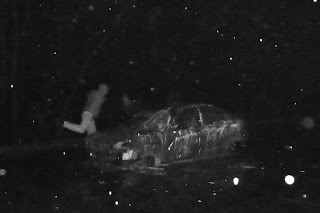 This past Monday, I went to a pep rally (pictured above) where pretty much everyone from campus came out to buy shirts with anti-covenant slogans, eat pizza, and watch the soccer team obliterate a car symbolically representing Covenant. The big game was to be the next night, and while I had been only vaguely interested in going that day, the cult like atmosphere of the pep rally convinced me that I had better tag along and check it out. This put me in a rough spot, because I had applied for Break for Change, a Spring break mission trip program, and was supposed to go to the meeting to find out if I had been accepted the very next night (at the same time as the game). As it turned out, there was no conflict. The next day, early in the afternoon, everyone received an email that the big game had been postponed until November. The reason for this delay was stated to be "field conditions". It quickly surfaced however, that the "field conditions" spoken of were a collection of pro-bryan slogans that had been painted (with permanent house paint) all over Covenant College's soccer field. So I didn't go to any game that night. I did go to the Break for Change meeting, and found out that my application, despite being submitted at the last minute, went through, and I will, God willing, be going to Latvia this Spring to help teach a film workshop for highschool students.

So there was no soccer, but last weekend, while I was not at homecoming banquet for various reasons that I shan't mention, I went to the school rugby club's first game in Chattanooga. This picture pretty well sums it up: 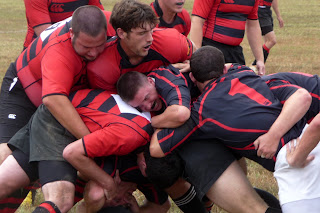 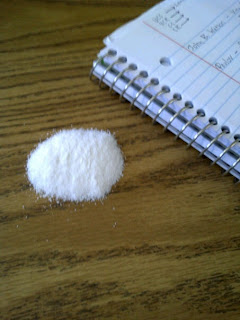 On the academic front, I had a surprise this Monday, that while leaving me unsure if I'm either brilliant or retarded, was pleasant nevertheless. Last Friday, I had been shocked to get a D on my first psychology test, even though when I took it, I had felt like I knew almost all of the answers. When we went over the test on Monday, I found that the scantron form had a back as well as a front, and I had stopped at 50, when there were really 65 questions on the test. I showed it to my professor, who very graciously let me step out as she went over the answers with the class and then fill in the 15 questions that I had overlooked after class. My score consequently went from a D+ to and A-... which is always a nice thing. To the left is powdered lemonade (not crack, as some of my friends who saw the photo on facebook suggested) that we used for a Pavlovian experiment. 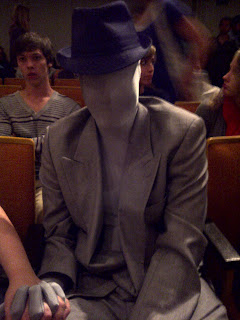 Today I discovered (or rather my Dad, who I was on the phone with discovered) a new use for duct tape. While I was on my way to the grocery store to by some more tea, my passenger side window came off the track and retracted all the way into the door. I ended up spending most of the evening trying to fix it and driving to Lowe's and Walmart in search of tools to try and pull it up out of the door. In the end, I bought some duct tape thinking that I would at least cover it over with plastic for the night and then probably take it to a garage tomorrow or Saturday. Then my Dad told me that I should see if I could feed the duct tape down into the door through the gasket and attach it to the window glass. I was a little skeptical at first, but after only a minute or so of fishing around for the glass and trying to keep the tape from sticking to everything else, I was able to affix it to the window and pull it back up out of the door. I then looped the tape around the top of the door frame so that the window won't get lost again, and while I won't be able to use it right now, I can at least wait until I'm back home to take it to the shop. So my Dad gets huge kudos, first of all for creative problem solving, and secondly for doing it with duct tape.

That blows about the field... what a jerk thing to do!

And I've been having car troubles of my own... my driver's side door won't open (from the inside OR out), and my rearview mirror fell off.

I wish we had spirit week. I might have to suggest it.

Hectic is the theme of the year so far. I can't wait for break.

Ah, duct tape. Our car did the same thing! I hope it is easily fixed.

Kelly: that's annoying about your door. I think my car had that problem back when it was still my parents car, but we got it fixed.

Hannah: Yes, Spirit week is fun. Sorry your having a hectic semester, but yes, break is getting close!

I'm guessing that would be the invisible man in the middle photo? Can't believe you missed an opportunity to be Jack....anyway, wow! What a week! Glad you made it through in one piece and I advise to stay away from soccer team people :/ the lemonade experiment looks interesting-is it something I could use with my students?

Jack Sparrow or Jack Bauer, because there was already a Jack Sparrow. I suppose you could do the experiment with them. It didn't work to well for me honestly, but if you google pavlov lemonade experiment I'm sure it would tell you how to do it. Most of the are nice actually.

I didn't know windows could do that. Duct tape is amazing. That's a new one though.


What kind of tea did you get?

I didn't know they could do that either.

I believe I got red rose tea. My favorite kind is Tazo, but they don't have that down here.