The Worst Poet Ever - Officially 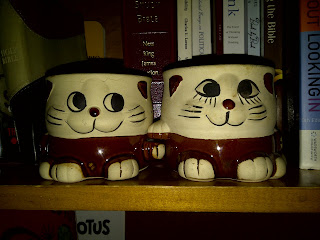 This evening I won a poetry contest sponsored by the college literature society, The Broadside. This sounds rather impressive, until someone tells you that it was a bad poetry contest, in which the person who could write the worst poem won. It was actually a lot of fun though. I hadn't written anything funny in a long time, and this was definitely a good opportunity. I was told at the beginning that the prizes were intended to "match the quality of the poetry", so I wasn't really sure what to expect. I ended up taking home these to adorable mugs though, so it was all worth it....

I have decided against posting the winning poem here for several reasons, however, if you real must read it, I think it may be available on The Broadside's facebook fan page at some point.


This week I did a lot of reading. For my Psychology of Comm class I had to write a response to Blink by Malcolm Gladwell. This of course meant that I had to read it, and this detail was complicated by the fact that I didn't actually get the book from Amazon until last Saturday. I finished the book at around one Thursday morning, and finished the response sometime around two. It was well worth it though. I had intended to post my entire response on here, but realized that it was a bit long-winded, and might give away a few things that someone wanting to read the book might not really want to know. So to summarize, Blink is about making decisions based on subconscious intuition, as opposed to analytical thought process. Gladwell, among other things, points out a number of situations and case studies in which having too much information hinders peoples ability to react correctly, and instinct wins the day. After presenting lot's of cases that challenge everything we thought we knew about how our minds work, the book is a bit vague in it's conclusions. Still, I would definitely recommend it to anyone interested in psychology or communication, or who just appreciates good writing. Also, I would recommend you get a copy that has the "New Afterword by the Author", as it provides some conclusion and closure that the book itself lacks (the one I have pictured here has the afterword, but those of some people in class didn't, and I think it showed in the conclusions they came to about the book).
Posted by Andrew at 9/18/2010 01:13:00 AM

Reading Blink for Psych of Comm turned me on to all of Malcolm Gladwell's books. I especially recommend Outliers.