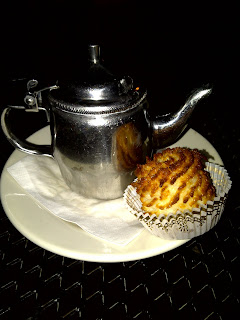 Yesterday I finished my second full week of classes and my third week in TN this semester. It was long. I also came down with a pretty bad cold part way through. Since Wednesday I've been feeling slightly better, but far from well. By last night I was feeling in just barely good enough shape to go to Chattanooga where we watched some live indie performance by a chick band who's name I never actually caught. Afterwords we went to Rembrandt's, a coffee shop in the city's art district. It was about 11 by then, and I just wanted to order something that didn't have caffeine and wouldn't be too expensive. I ended up getting ginseng-peppermint tea and a coconut macaroon, which were both very good.

This morning I slept in really late and then spent most of the afternoon reading doing Spanish homework.

Thursday night, when I was feeling sickest, I went to a meeting for the Acts Project, a missions/internship program that Bryan is involved with. It wasn't really something that I was interested in at all before this semester, but after having a conversation with Kait about a week ago, I started thinking about it. She spent this past summer in Beirut with doing a communications journalism internship through the program. Lebanon is somewhere that has always fascinated me, and the description of the position sounds like something that I would really enjoy doing. On top of that, they say they are actually "desperate" for people in that region, and if I have to spend next summer helping someone for free, I would just-as-soon that it be someone who actually needs help.

So, if, and I say, if, this ends up being what I do for my internship, then I'll be even sorrier that I'm taking Spanish with Pascucci than I am already. In Lebanon, they speak French. I would have rather taken French than Spanish, but I somehow felt like it was "unpractical" and I would never use it and decided to take Spanish, even though I knew the professor would be harder and I wouldn't enjoy it. I guess Spanish is still something I should be learning regardless of what I end up doing next summer, just with the way the world is going and all, but I really don't like it.
Posted by Andrew at 9/11/2010 05:54:00 PM

I'm so sorry about your cold, Andrew! It seems to be going around...

Rembrandts is one of my favorite places in Chattanooga. Have you tried a buttercream? They're to DIE for.

I wish you luck with whatever you decide about the Acts project! It seems like a really great oppurtunity.