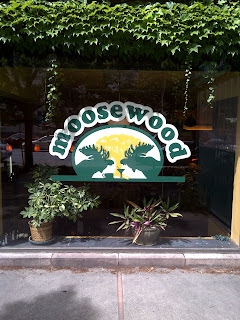 I hope to leave for Tennessee the beginning of next week, and the day before yesterday, a flurry of preparations that that had been put off so far commenced with my parents and I going to Big Flats NY to shop. Originally they were going for something else, but decided to take me along to the AT&T store as I have been in rather serious need of a new phone. I also needed a suit (I've always got by on borrowing my Dad's stuff, but now that I'm going to Bryan and living in the South, I have to dress up a lot more often). My Mom suggested we stop in Jos. A. Banks and just "look" at what I might want. As it turned out, they were having a 70% sale on everything just that day. So after about an hour of trying things on, fitting, marking for the tailor, I have two brand new suits ordered.

We finally did make it to phone store, where I traded in my four year old Razor. I had been thinking about just a newer flip phone, but we got a hundred dollar credit for my ancient razor, and I ended up getting a BlackBerry Torch 9800 Phone (AT&T)

. It's my first step into the wide world of smartphones. Maybe I'll post specifically about the features it has later, but for now I'll just say that it's a major upgrade. I took all the pictures in today's post using it, and I was impressed not only that they look quite decent, but that I actually had to downsize them before uploading them on here. It must be almost the same resolution as my first digital camera.

Yesterday I went on a trip to Ithaca with my Mansfield friends. We ate at the famous vegan restaurant, The Moosewood, and spent the rest of the afternoon trolling around the commons at stores that sold things like vintage records and hooka pipes. Below are some coffees we got at the Maté place, which was great. 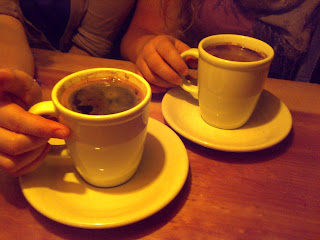 While at a record store, Patrick bought more vinyl than I thought we would be able to carry back to the car. He and Nicole decided that they wanted to have a record party or sorts later, so on the way back to Anna's house where we had started, we picked up Pat's record player. We had planned on plugging it into the TV and just using the built in speakers. Unfortunately, we were never able to get the TV to pick up the signal. This led to an hour and a half long troubleshooting rampage that involved trying three or four sets of speakers, multiple cords, making a run to Walmart for adapters that didn't work (fortunately I was able to return them this afternoon). Finally, Ethan who had showed up at the house with several other people, offered to drive to his apartment and bring a guitar amp, which did work. So all that to listen to Lucy In the Sky with Diamonds. 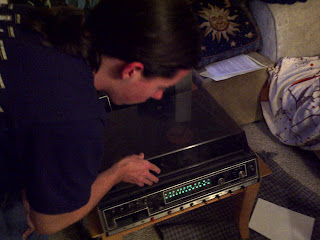 We spent most of the rest of the evening out on the porch listening to the vinyl and setting things on fire. It was kind of sad to say goodbye, because I know it may be several months before I see some of them again. 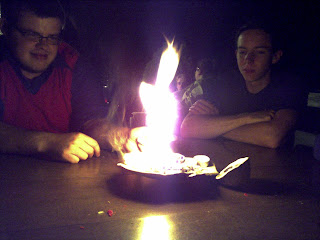 So your classes start the 30th?

I think the 25th. I have to get back the 23rd, but I don't think they start for a couple days.