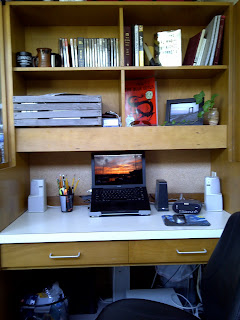 I finished unpacking and setting my stuff up yesterday and then made a run to Walmart (where else?) with Jonathan to get a few things for our room. I like my dorm room infinitely better than last semester. First of all it's in Woodlee, which is a newer building that Long, and has, in my opinion, a better layout. There is also a distinct and much appreciated absence of spiders, cockroaches, and Marilyn Monroe posters, all of which were present in my room last year.

This is a picture of my desk, which looks slightly different now, because I bought a keyboard this morning. It was only eleven dollars, and will hopefully last longer than my fifty dollar mac keyboard I bought that started to go bad after just about a year. This one doesn't have some of the convenient volume and screen controls on it that the other did, but it is actually better for typing, which is the main reason I need it.

The outlet on my desk wasn't working when I arrived. After plugging things into it and six or seven different combinations, I put in a maintenance order. The guy showed up within a couple hours, and guess what, as soon as he plugged something into the outlet, it magically started working, and nothing I could do would get it to stop working. He did take it apart and found a slightly loose wire inside, which may have been the cause of my experience before, but whatever it was, it decided to correct itself right before he got there. This isn't the first time this has happened to me with something like that. In fact, it's almost getting to the point where I'm scared to ask for help with electronics, because I know it will mysteriously self-correct right before the expert looks at it. That may sound like paranoia, but it's based on several experiences....

Classes start tomorrow, which will be good. I'm not entirely sure if my schedule is going to remain entirely the same as it is now, but I'm looking forward to some of it.
Posted by Andrew at 8/24/2010 05:15:00 PM

I know just what you mean by things not working when you use them, but as soon as you get an expert...wala! It drives me crazy too! : ) Hope classes go well for you!