The Most Epic Settlers Game 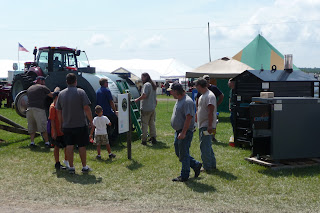 I spent three days of this week working at Empire Farm Days in Ovid NY. It is the biggest show that ThisWarmHouse does every year, and unlike the others, it's just close enough to commute. My Dad and I woke up around six each morning and made the two hour drive through Elmira, past Seneca Lake, and then up to the huge field where the show is held.

It was pretty slow the first day, and on top of that we forgot to bring any chairs, which means it was a really, really long day. The second day was very busy though, and the third day, which in the past has been slower, was almost as busy as the second, which kind of made up for the first. So in the end it was a good show.

When I finally got home yesterday I was really tired... something about waking up early, standing in the hot sun all day, and talking to dozens of people is exhausting. I probably should have gone to bed, but instead I went to the Bible Study that Josh, Patrick, and sometimes some other people do in Wellsboro and Dunkin Donuts. Thomas, an old friend of mine, was there, and he brought Settlers of Catan Cities & Knights Expansion

. After reading through Acts 8 and discussing it for an hour and a half or so, we headed up to Patrick's house and played what turned into what I believe we all agreed was the most epic game of settlers ever. 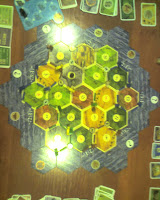 I had never played the Cities and Knights expansion before, but was very familiar with the original game. Cities and Knights goes to 13 victory points instead of 10, and in the last half hour of the game, which stretched for over three hours all together, Josh, Patrick and I all made it to 12 points. The problem was, we actually ran out of space on the board to build. I had reached 12 first, but was stuck in a complete check mate situation where the only way I could get one more point was to randomly draw one from the progress deck, which was unlikely, or steal another players metropolis, which was difficult, it seemed like we went through four or five complete rounds in which each of us thought we were about to win on our turn, or about to lose on every other players turn. In the end Josh, who wasn't completely boxed in like me, built a new settlement and won. That was a little disappointing, but it was still one of the most fun matches I've ever played before.
Posted by Andrew at 8/13/2010 02:41:00 PM

I love Settlers too! It's so much fun! That definitely sounds like an extreme 'epic' game! : )