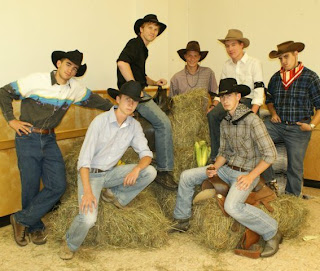 Yesterday I attended the 16th birthday party of an old friend and ex-neighbor (a title shared by very few people on this earth) Mariah Slack. I could tell you what the theme was, but I will let you try and guess from the above photo. Safe to say, there was a contra-dance band, square dancing, and several food eating contests. It was a legit party.

Speaking of cowboys and indians, I watched a movie this evening (no cowboys actually) that I have been wanting to watch ever since I was six and my parents wouldn't let me: The LAST OF THE MOHICANS

. It was great, and I was right to want to watch it, even if I might have found it slightly disturbing at the time. It was also fun to watch in light of my recently discovered Lenape heritage. While the Lenape were not Mohawk (you see, it was the last of them) they were from the same basic area and time.

Tomorrow I'm headed to Seneca Falls NY (coincidentally close to where LOTM is supposed to have taken place) to work a show there for ThisWarmHouse. It's Empire Farm Days, by far the biggest venue we do all year. Not quite my favorite, but it should still be fun... as long as the sun doesn't shine too bright. You see, Empire is on this huge flat plateau high above the lakes. There is no shade and no and no water... only dust, tractors, and Mennonites for as far as the eye can see.

So I will def. be posting about it with photos afterwords, and possibly even from the event itself depending on what kind of internet we are able to get a hold of.

Email ThisBlogThis!Share to TwitterShare to FacebookShare to Pinterest
Labels: Empire Farm Days, NY, Slacks, The Last of the Mohicans

Sounds like a super fun party! : ) I'll have to look up that movie. Sounds interesting.

You look good in a cowboy hat.