Sorry I haven't posted in a while. I've been kind of busy, but mostly just haven't felt like it. I'm taking 19 credits this semester, and at this point I can't say that I like any of my classes at all. So it looks like it's going to be a long semester. I've also been struggling with a serious lack of motivation. I know it's always hard to get back into the routine, but this time it feels different somehow; like I've finally gotten to the point where I just don't care anymore. At the same time I've had to make some kind of tough decisions with my schedule. It's not really turning out how I had wanted it to, but if I want to graduate on time in three semesters and before all my friends are gone, I don't really have much choice now days.

So, all this, and some other things as well, have had me in the mood to do anything but blog. None the less, I have attended some interesting events in the past week since I arrived. I went to the All College Picnic up at the Fort Bluff camp on the mountain above Dayton, and while I wasn't in the mood to do much but talk with some people, I did get some pretty serious video of other people playing on the blob in the lake:


The other night was Bryan's first home soccer game, and while the game itself was cool, it was raised to a whole new level of epicness by the presence of that infamous African invention, the vuvuzela: 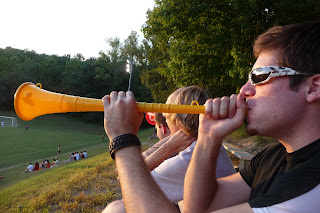 The noise of the vuvuzela, if you were unfortunate enough to not watch the World Cup this summer, is something akin to a low buzzing insect, and when you get a whole crowed armed with them, it starts to sound like you are in the center of a swarm of angry bees. Speaking of buzzing insects, there are tons of cicadas around here... so many in fact that my Mom has commented on the noise they make while on the phone with me. A couple nights ago, while heading into my dorm, I noticed one sitting on the wall right below the flood light. On my next trip by, I noticed it buzzing about wildly and smacking into things. Then, it dropped on the sidewalk in front of me and lay still. I scooped it up and brought it into my room. 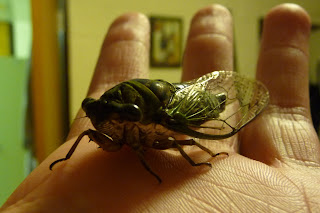 At first I thought it was dead, but then it moved, and I nudged it over to the Ivy that I have growing above my desk. It climbed all the way up the vine and latched on for almost two days. Then it fell off, and again I thought it was dead. THEN, the next morning, I saw it twitch again. I turned it back over and tried to give it some water to drink. I'm not sure if it drank any, but within a few minutes it was crawling around, and then flew off the shelf and onto the floor next to my bed. I decided it was ready to be released back into the wild... if the wall of my dorm can be described as wild. I took it out and placed it on the bricks in the exact same spot that it had fallen from originally, and there just so happened to be another cicada right next to it. I turned back to the door and realized I had left without my keys and it was several minutes before someone came out and I was able to get back in. It seemed worth it though, knowing the the cicada had been saved.

The next morning, coming back from class, I looked at the wall and saw nothing. Then, on the ground directly in front of the door was the mangled, but still unmistakable body of my cicada, who had obviously fallen, and this time been stepped on. I felt a great sense of defeat.
Posted by Andrew at 8/30/2010 11:38:00 PM

Your Cicada story makes me sad... but it was a valiant effort on your part, Mr. Wilbur. :)

*sniff* Well, at least it wasn't your fault. You did your best. Cicadas rarely live past August anyway. Does your dorm allow fish?

Sports have yet to start here. i want a vuvuzela! And a rainstick. They're on my Christmas list.

Here 20 is overload, although I think my GPA is good enough that I could take up to 21 before I started having to pay for them individually.

Yeah, they do allow fish, and I have considered getting some. I'm mainly just not sure if they would like the drive from here to Pennsylvania.

So sorry about the cicada-I'm thinking a small portable terrarium with a red eft -a red eft probably wouldn't die on you and would be a good traveling buddy.