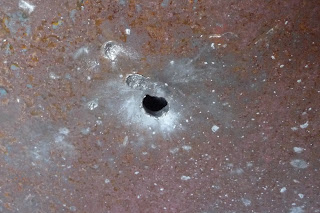 Today I performed my yearly ritual of sighting in/target shooting with the 30-06 (my beast gun). I'm not sure why I did it, as I will for the first time ever, be gone for hunting season, and thus won't need it. Just knowing that it is sighted in somehow makes me feel better though.... So today, while mowing the lawn up at the Inn (a job that takes about two days a week) I decided to take a break and do some shooting.

The Inn itself, as I mentioned several months ago, burned to the ground. The massive stone chimney was still left standing, and I realized that it made a beautiful backdrop for shooting (you have to be careful about that sort of thing when you live on a hill. Rifle bullets can travel up to two miles, so you need to make sure there is something behind your target to stop them). I set the target up right in the fireplace and then set up some cinder blocks about sixty-five yards back to use as a rest. I was surprised how well the scope was adjusted already, and I only had to correct it a bit on the x-axis. Afterwords when I inspected the target I was surprised to find that the bullets had penetrated all the way through the 1/4" steel liner of the fireplace! For some reason I had always thought that that much steel would stop a bullet. Apparently not the 30-06 though! 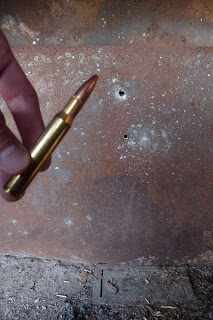