Auctions for Food and for Art

First of all, I'd like to thank the people who commented on my last post! I was surprised how much interest it got even though it was (in my opinion) long and rather dense.

Last night I went to a Pocket Vinyl show in Corning NY: 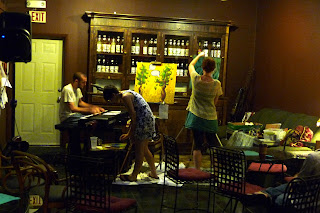 Pocket Vinyl is a piano rock/art band that features live painting while the music is being performed. Eric was awesome on the piano and singing, and the art was really cool!

The show was at the Soulful Cup, which is one of my all time favorite coffee shops, and I invited a couple friends to come with me from the Mansfield area. One of them was able to come, and while I was waiting for her in the parking lot of ThisWarmHouse, the most random and unexpected thing happened.

A big van pulled in and did a U-turn around the parking lot, stopping faced toward the road. As I looked at it with some puzzlement, the doors opened, and who got out, but several of my parent's friends from Grace Community Church in Corning. Jordan, my old neighbor was with them, and his Mom asked where I was going. When I told them, they asked if Jordan could come with me (apparently they were going a different way back). Of course I said yes. Before we left though, they showed me their van, and it was FILLED with food. apparently they had been at some kind of "food auction" down state in the Pennsylvania and had picked my Dad's office parking lot to drop off some of the food for one of them who lived in Mansfield. 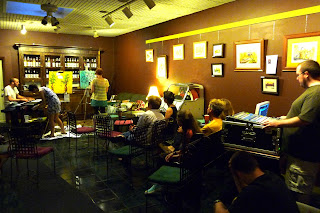 So I ended up having two people with me on the way up after all, which was cool. After the show Nicole (my other friend) and I were invited to the "after party" at Alex's house, which was fun. I realized I hadn't been there in forever, which is kind of sad, but anyhow, it was good to see them again.

PS. After the concert there was bidding for the paintings (four of them) and my family, who had come up separately bought two... so maybe I'll post some pictures of them later.

Sounds like fun! By the way, I changed my blog url to 'www.bestcello.blogspot.com'. That's what it was before I changed it and when I changed it, I didn't realize that all my other followers were still following 'bestcello' and not 'livingforchrist1'! So, I'm going to do a 'warning post' on my blog to tell everybody to change it. : ) Sorry about that!
-Anna

Thanks for sharing this! The Soulful Cup... what a name for a coffee shop!