Congratulations - You've Reached the Pretend Top of the Mountain 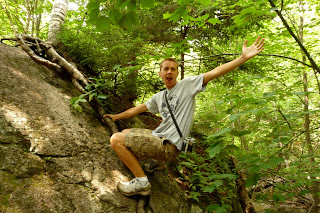 Yesterday morning we drove to the Adirondack Park Lodge where many of the parks famous hiking trails began. We decided to take the short but steep trail to the top of Mt. Joe. It was only .9 miles to the top, but the trail was as steep is it could possibly be and still be considered a "hiking" (rather than climbing). 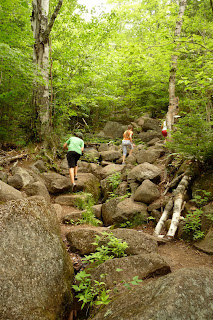 Not long after setting out, our group became split in two. I ended up following the faster group, which kept moving and didn't make detours for photos every five minutes. The trail, as I said, was remarkably steep and covered in boulders, and we were all relieved when we reached a large stone bluff at the top with a sign next to it that said "Summit". It was a cool place, although we were all surprised that there wasn't really much of a view. Isaac and Nicky who were with our group decided that they wanted to hid and surprise the other group when it came. After nearly twenty minutes however, the second group had yet to show up, and we decided to head down the longer, not quite as steep trail. The trail that we had come up continued though, and Isaac and I had some doubts about whether or not we had reached the real summit. The rest of our group though didn't want to go further, so we ended up heading back down the mountain. On the way we ran into this toad: 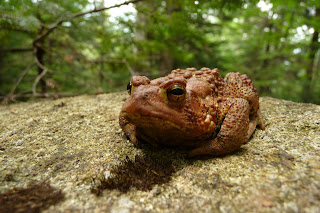 We reached the lodge at the bottom only to find that the other group wasn't there. We waited for what must have been at least half an hour before they returned. And then we got the bad news: we had not been at the real summit. The rock we had reached, is what is known as the "False Summit" because many people stop there, when the real summit is several hundred yards beyond. When the boys had insisted we hide, the other group had apparently walked past us, not making the mistake we made.

Andrew,
Looks like someone is having fun in the moutains! Are the Adirondacks at all the mountains associated with Rip Van Winkle? They're in NY right? Just wondering if Washington Irving wondered around those parts. Anyhoo, I wanted to thank you, several months late, for responding to my post on Edgar Allen Poe. You probably don't remember at this point . . . but yeah, just getting back into blogging and just checked my blog and saw your comment. Thanks a lot and I hope you checked Poe out. He's definitely "out there." The key is to enjoy that "out there"-ness :)

I think Rip Van Winkle was in the Catskill mountains, which are up here somewhere, but I think they are different.

If you're going somewhere, you might as well get there within the near future. Haha!