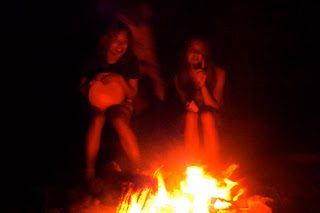 This past Saturday was my sister Mattea's graduation party. We invited a ton of guests, and my parents who are usually OCD about how our place looks took it to the next level and spent the whole week and a half before the party re-landscaping. After all that, we were afraid it was going to rain, but it cleared up just a few minutes before people arrived and everyone ended up having a great evening.

There have been a fair amount of thunderstorms in the last couple weeks. Ever since last summer in Sarasota when I discovered that my true photographic passion is capturing lightning, I have been trying to do it again. It's been difficult though, because certain conditions have to be met exactly for it to work, and then, even when everything comes together perfectly, you still have to get lucky. Since lightning is, well lightning, it moves really fast, and the only reasonable way to catch it is to set your cameras shutter to stay open for like a minute or so. This can only be done at night, because in the day time, have your shutter open for that long will just give you a bright white photo with nothing visible at all. On top of that, it can't be raining, which is somewhat rare during electrical storms.

For all these reasons, I have been so far unsuccessful in getting any good lightning pictures yet this summer. I have taken some other night time photos though. Here is one of Ursa Major, the big dipper: 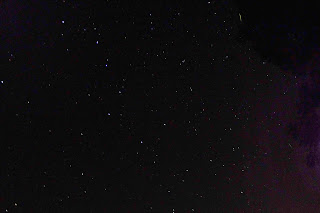 And here is a photo of the gas well they are drilling a ridge over from us. This fall we will probably have one of those in the field right by our house. 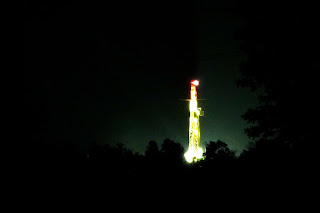 There have been a number of really beautiful evening, or dusk skies as well. One in particular last Thursday night. I think there had been some storm activity or something, because the sky was partly cloudy, but had the most unusual colors. Some of them were colors that you don't usually think of as "sky colors" like brown and tan. Those were all in some parts of the sky, while other parts were pink and purple and blue, and gold. All that combined with the sunset and a really unusual cloud pattern created something very striking and beautiful. I was running all that evening, and all this happening in the sky may have been part of what distracted me into nearly running a half marathon. The farthest I had ever run before that was six or seven miles, but that night I went more than twelve. I didn't really want it to end, but eventually my joints started to get sore, which almost never happens to me. When I got home and tracked my route on Google Pedometer and found out why I was sore.

You do have some beautiful talent with the lightning! Don't ever give up--you never know where your passions might lead you. This might be rather cliquey but my favorite sky is when it's glittering with stars or during a severe thunderstorm when you realize what the color black really is!
Anyway, keep posting and having a wonderful summer!