Getting Wild In Wells Township 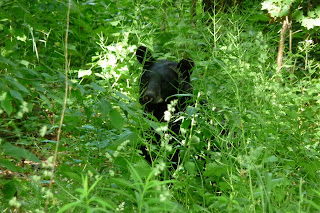 The bear population here in our township in Northern PA has been on the rise for several years. This year though, things have gone to a whole new level. It used to be that seeing a bear was something that only happened a few times in your life (my Grandma is in her 80's, and she had lived here most of her life and never seen one until a few years ago). Lately however, it has become an almost daily occurrence.

Two weeks ago I was leaving for a party around eight-thirty or so and I almost hit one running across the road in front of my Grandparents. My brothers and sisters and parents have had multiple encounters, and my cousin Matthew ran into one while running last week. Last night, two of them walked straight down our lane, with us standing there in the yard watching them. Today, I got the closest I've probably ever been to one in the woods below our house. I managed to take quite a few pictures and some video of him as he made his way from the bank below our driveway to our compost pile out by the field. He finally seemed to acknowledge my presence when I was about fifteen feet away from him, and started walking slowly towards me. It was then that I fully realized how big it was, and decided it was best for me to retreat. This was the last picture I snapped as he was walking toward me: 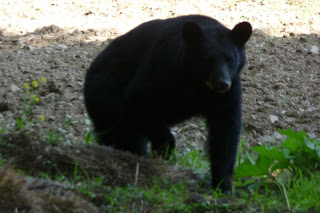 In other wildlife news, I got my first woodchuck of the year just a couple days ago. I had been hunting several times, but not seen even a squirrel. Then this guy appeared on the rock pile to the south of our house, an age-old woodchuck dwelling. I took a shot at him from the window (about 200' away) and missed. When I walked up though, he stuck his head out from behind a rock, and I shot it (the head, that is...) 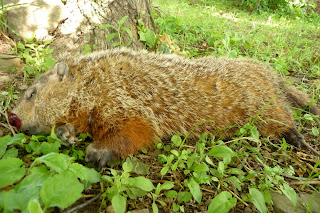 your woodchucks are more handsome than ours.

Haha, I never really thought of them that way... but I guess that was a pretty good looking one.