It's been an extremely busy weekend. On Saturday my family went to Harrisburg, the state capital, to watch Mattea's PHAA graduation ceremony. It brought back quite a few memories of the day approaching three years ago now when I walked into the same auditorium in the capital complex forum and graduated from the same program. Although there were a few less people graduating in her class than did in mine, it seemed like the ceremony took a lot longer. This may have been partly because I wasn't nervous this time, but I also think there were many more performances before hand. Some of these were phenomenal, and others were cringe-worthy. A family quartet played Bach's Night Music, which was really good, and another family band who's name escapes me, played classical/folk music that was easily one of the best live performances I've ever heard. The most memorable performance however, must have been the two girls who did Irish clogging. Their CD didn't read in the sound board, and after several horribly awkward minutes of waiting, the president of the entire PHAA program suddenly announced that he could play fiddle, and as it turned out, he could! (this also reminded me of the only other time I've seen live clogging, here) 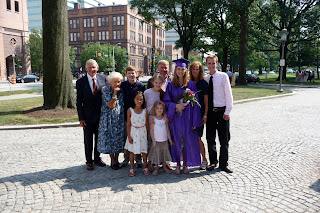 Note: thanks to Halifirien Pilgrim for above photo!
Below is a picture of the ceiling inside the Forum which shows a stylized version of the cosmos. It's pretty amazing! 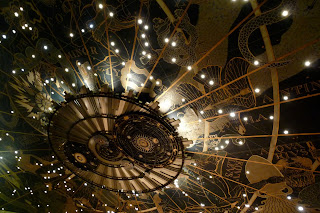 As soon as we got home that night I jumped in my own car and took off back in the direction of Wellsboro to go to Rooted - a college-age worship event that a church there started putting on this summer. It turned into a fairly late night.

This morning I went to house church with my family. I was feeling tired and almost didn't go, but was glad I did. My uncle Bruce, who recently got out of prison was there, and spoke as the main speaker. It was really good to hear his story, and to see him for only the second time since he go out.

After that we went to yet another graduation party for an old friend from Corning, Jarrad. By the time we got back from that I was pretty much exhausted. I ended up having a long text conversation with a friend, which, seeing as we don't have service at our house, involved lots of running back and forth from our house to the end of the driveway where we do get signal... it seems like this summer I have spent a great deal of time standing at the end of my driveway, cell phone in hand.

At Wegmans in Corning this afternoon I bought Kippers. They are smoked herring from Germany that come in a can, and look really kind of disgusting. I was feeling in the mood to do something mildly adventurous though, so while we were in the foreign foods section, I grabbed a can. They are delicious! Instant favorite!
Posted by Andrew at 6/27/2010 10:45:00 PM