Turning Into a Hippie 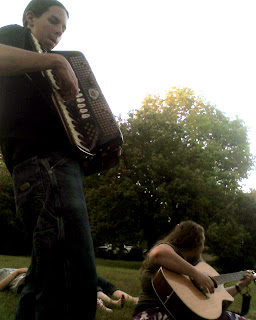 When no real opportunities to do anything cool came along this summer, I was afraid it was going to be really boring and depressing. So far however, that has not been the case.

For the first time ever, I have kind of a couple groups of people to do things with, and have actually been quite busy (busy for me at least) doing stuff with them.

An old friend Chris moved back to Corning recently, and I've hung out with him some. I've also been spending a lot more time than usual with the Wellsboro/Mansfield crowed (partly due to the fact that many of them are staying for the summer instead of going home).

At any rate, I've been having a good, relaxing time so far. In fact, I'm almost starting to feel like a hippie or something. No, really, it's just that I've been spending a lot of time sitting around fires, playing acoustic instruments, sleeping on the ground, and other activities that I shan't mention here that are classically associated with hippies.

I have been working some, which I suppose detracts some hippie points.... My Dad's business is starting to feel alive again, and there are some big possibilities on the horizon. We are getting a new website, and I'm going to be in charge of setting up a bunch of social media stuff once that happens. We had a meeting today at a coffee shop in Mansfield with Walt, David, my Uncle Tom, my Dad and myself to talk about some of the stuff, and it looks like there will be a lot of things happening.

I drove my Dad to Geisinger the other day for a a series of MRI and some other tests to check up on his condition. He seems to be doing well, although I don't know what these latest tests showed. We drove the old Mercedes-Benz down, which was fun.

Hippies. just so you know. are cool :P

Yeah, I guess they are pretty amazing.