Today was the 10th annual Bob Bridgman Memorial Day 5k. It's generally the only official race that I run, so every year I try to beat my time from before. It has a reputation as a really hard course (half of it is straight up hill) and I have been told that whatever time you get on it, you could probably expect to do at least two minutes better on flat ground or a track. 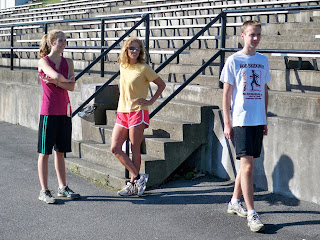 This year I was finally able to convince my Mom and sister to run in it too. That was nice, because besides them Ben, was the only other person I knew this year.

The first year that I ran the race I did it in 24:28. Last year I was able to take more than a minute off at 23:22. This year, I went really fast (for me) on the first mile (6:15) and I was mad at myself because I was afraid I would die on the up hill half. I did slow down a little, but still did the up hill at about 8 minutes per mile. So I finished in 22:15, taking another minute off my personal record. So I may not be signing any contracts soon, but at least I'm improving. This was also the first year that I placed and got a prize, coming in 3rd in my age group. That actually had more to do with turning 20 than it did with getting faster, but hey, I'll take it. Below is my Eric Liddel style sprint on the last 100 meters ;) 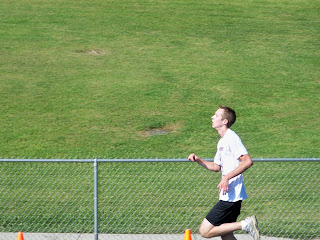 Here are my Mom and I after the race. 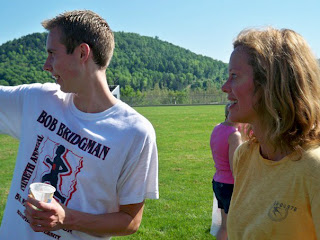 So that's always a fun thing to do on Memorial Day.

In other news, I ordered a mandolin on MusiciansFriend.com. It isn't here yet because of Memorial Day, but when it does I will probably post about it. I kind of learned to play last Wednesday night at a campfire with some friends. I was always kind of interested in it, even before I took up guitar. I started thinking about it again this past fall when the Craggs, an Australian folk music band came to Mansfield and I talked to their mandolin player. So when I learned some chords the other night, I started thinking how versitile it is, and how I can take it just about anywhere because it's so small. So I bought an Ibanez A-style one.
Posted by Andrew at 5/31/2010 12:06:00 PM

not to mention once you learn mandolin, you can practically play a violin. All you'd have to learn is the bowing.

Really? I didn't realize the strings were the same.

Andrew, you are incredible!!! :) love the mandolin too.