The Prince of Williamsport

I've been in Williamsport an unusual amount this past week. On Monday I drove through twice with my Dad on our way to a medical appointment for him. On Thursday my Uncle Tom and Dad and I went down with one of our European commercial biomass units to show the biomass expert from the Pennsylvania Department of Conservation. 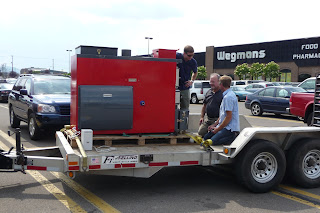 Today I went down to meet Jonathan while he was up visiting family. It was the last chance I'd have to see him in the States before he leaves for Italy again in a week.

We had planned on meeting around 2:00, but then Jonathan called and wondered if we might go see Prince of Persia while we were there. I googled where it was playing and found one showing at 1:00. We decided to try for it, and although I had to leave right then and drive about 80 the whole way there, we made it only missing the previews.

The movie was better than I expected (and better than the reviews I'd read). For a summer action flick, I'd give it 4 out of 5 stars. The fight scenes were cool, and the plot had at least a bit more depth than I expected. I really like the setting too, even if it was more fantasy than historical reality.