[Not] Going To A Pawn Shop 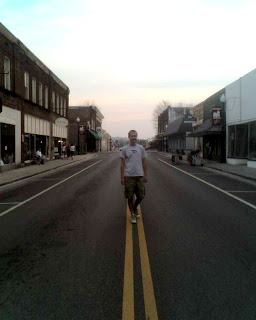 It's Easter Break now, which basically means a three day weekend. A lot of students have gone home, but since I live 13 hours away, it doesn't really work for me. I've still been having a pretty good time so far though.

It was in the 80's today, and really, really sunny. I played frisbee this afternoon with some other students who had to stay on campus, and also drove around Dayton a bit.

I went to the Harmony House cafe, and had a delicious frappuccino. On the way back I took a detour to try and decided that I would go to this pawn shop and see if they had any instruments for sale (I was curious because I've never been to one before. I pulled into the parking lot, and, while there weren't any advertisements for instruments, there were several for guns... which are apparently it's main item of commerce. I was still interested in going in, but I thought I would at least wait and see who was going in or out for a minute first. I saw a rough looking older guy in jeans and a white Tshirt come out. Then another rough looking older guy dressed exactly the same walked along the porch. Then a truck pulled up and another rough looking old guy, also wearing jeans and a white Tshirt pulled got out with his wife and walked in. Then a really scary looking middle aged guy who wasn't wearing the apparently standard Tshirt pulled up and went in.

I pulled out and drove back to Bryan.

This evening I went down to Dayton again with Cami and her friend Heather. It was a kind of "First Friday of the Month" thing that they do where they block of the main street and let people walk up and down and shop. We were about the only people there however, so if it weren't for talking to some of Heathers friends who owned a shop, it would have seemed a little eerie.
Posted by Andrew at 4/03/2010 12:14:00 AM