Most Epic Soccer FAIL in the History of... Everything

Since ancient Germanic warriors first kicked the severed heads of Roman commanders around the field after the battle of Teutoburg Forest, thus inventing the sport of soccer, there have been 5 fails that were considered to be the greatest, most epic... etc. Today, they were all left in the dust. 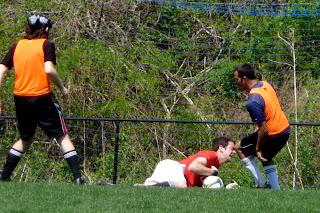 A couple weeks ago I signed up to play soccer for in a tournament with teams from Bryan and Covenant. It was to benefit the International Justice Mission, an anti human trafficking organization. I was reluctant to join, as I hadn't really played since I was 10 or 11. I was assured, however, that there would be other people there who had little or no experience; and there were - seven or eight of them. What we were NOT told, was that we would all be put on the same team, and that the other teams would be composed mainly of varsity players.... We didn't find that little detail out until we showed up five minutes before the tournament began. 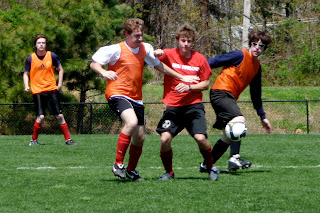 So we happily set out from Bryan hill this morning, with a random assortment of mostly borrowed soccer gear, mismatching shirts and gym shorts and drove to Rock City, on top of the mountain overlooking Chattanooga where Covenant College is located. We had a bit of trouble finding the fields once we got on campus, so when we stumbled out of the car it was only a few minutes until we had to play. That's probably good, because after I got out and saw Covenant's entire varsity team (which is in a higher league than even Bryan's varsity team) standing there in their uniforms, already stretched and waiting for us, time to anticipate what would happen next was not what I needed.

We lost the first game 8-0 (I think, I may have lost track after a while). The next one went 6-0, and then we had a break as two girls teams played. We did have one lucky streak, when a Covenant guy named Gomez signed up last minute and was deposited on our team. He was probably our best player, and although I felt sorry for him being stuck with us, he helped a lot.

In the final game we played most of Bryan's soccer team + Dr. Eisenbeck (who was a varsity player in college, which was not many years ago at all). And, in the last half or that final game, it happened. We scored. I've never been so excited about a score that had no chance of winning. So the final tally for the day was two shut outs, and a loss 7-1. 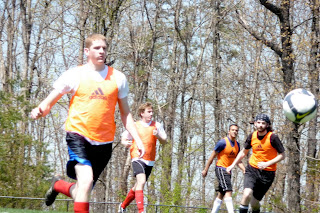 Despite the circumstances, it was pretty fun, and I remembered how much I had enjoyed playing as a kid. Next time though, I would definitely like to go up against people more near my own skill (or lack thereof).

It was a beautiful drive back, and before we went, Jonathan and I stopped at a Starbucks in Rock City, which was really cool (aside from a somewhat awkward encounter with two Covenant girls... but that's another story). Then the car we were following got lost, we got frustrated, and almost ended up going to Nashville....

So anyhow, that was the Bryan/Covenant Tournament. And here's to Bryan's "individual sign-up team" - as the organizers referred to us, or the "motley crew", as several other people referred to us.
Posted by Andrew at 4/10/2010 08:41:00 PM