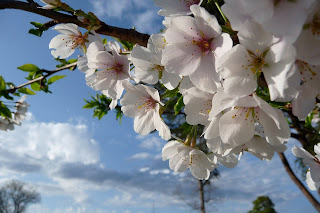 The campus is starting to look like Spring. There are lot's of flowering trees (thus, above photo) and the leaves are even starting to come out on some trees.

I hope all of you had a good Easter. Mine was. Better than I expected in fact. I ended up making some new friends and getting to know the area a little bit better (though it was still a far cry from last year, with Connor and Mary and Nicole in Austria).

This morning I took Cami and Seth to church at Westminster, which I think is where I'm going to go mainly from now on (when I go, that is). After that they ended up inviting me to come to lunch with the Thomas family. They have two children, Linzy and Kyle, who go to Bryan, and so their parents and younger brother decided to rent a cabin at 'Fort Bluff' a campsite near Dayton to spend the weekend. It was really nice actually have Easter dinner, and I ended up playing volleyball with them for a long time this afternoon.

I'm still kind of looking forward to classes getting back to normal again though, and the caf being open at regular hours and all that, but all things considered it ended up being a much better weekend than I had thought it would be.
Posted by Andrew at 4/04/2010 09:00:00 PM