Winter Jam In The Sunshine State 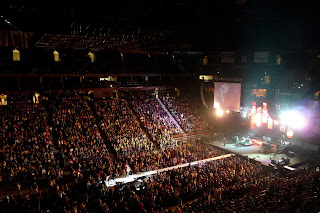 Friday morning, after completing my midterm for Biblical Foundations, I left Bryan with my Dad and sister and met the rest of my family in Chattanooga. It was good to see everybody again, as well as the new car. It's a used Q7, and since my car is an Audi as well, they had figured that the roof rack they brought for it would fit. However, it did not, and we were left riding all the way to Tallahassee with our luggage on our laps.

We got there in time for Mattea and Isaac and I to go to a big christian rock concert called winter jam with my cousins Michael and Jordan. We saw 10th Avenue North, the Newsboys, Third Day, and another group that I can't remember. I had always wanted to see a Newsboys show, so that was cool. It was different though, with the lack of Peter Furler's voice, and Phil Joel's bass... which were really my two favorite parts about the band. Michael Tait was cool though, and I have always liked DC Talk, so I guess this was almost like seeing them in concert (they even played Jesus Freak). So, the Newsboys with Tait. Who would have guessed?

I went home and went to sleep; woke up at four in the morning feeling really weird; went to the bathroom, and proceeded to throw up 8 or 9 times. Not fun. It's been almost three years since I was sick like that last... which is a long time, but not long enough. Fortunately I had stopped by that morning, and by evening I was feeling relatively decent again.

Today we left Tallahassee and drove across the state to Amelia Island. Our hotel is in a really nice historic district, and we have a view of the harbor. Unfortunately, it is not as warm as my parents were thinking it would be, so tomorrow we are headed further south down the east coast.
Posted by Andrew at 3/08/2010 07:41:00 PM