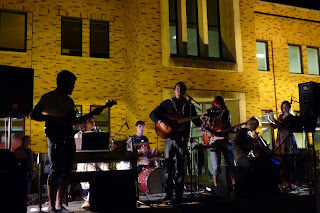 Last night was the annual Bryan Bash; a time when a bunch of campus bands play as you eat an enormous amount of wings and pizza. I got to hear The Little Foxes again (I can't remember if I really blogged about hearing them the first time or not). The wings were really good, and I ate too many. It's probably okay though, as I ran a few miles yesterday. On second thought, it would probably be fine even if I hadn't run a few miles yesterday... but anyhow.

After the music was over they showed the new Sherlock Holmes movie in the grassy bowl (which is just what it sounds like, a big grassy bowl). It was really good. I was inspired... inspired to start building crazy contraptions, fighting, and of course, to take up pipe smoking.

In other news, the Tokyo Police Club, one of my all time favorite bands (and by far the least well known) is getting ready to release their next album, and have generously put their first single for free download on their website. So go and download it now. I promise you will love it, and become a devoted TCP fan for the rest of your life! And if not, then you can have your money back. So go!
Posted by Andrew at 3/31/2010 10:29:00 AM