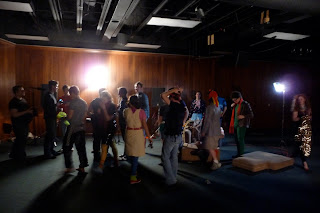 This evening at dinner I sat down at Katie Wilkens' table and she mentioned to me that a movie, "Silly Squad" was being filmed on campus tonight for an intercollegiate film festival and that they needed extras. I was a little apprehensive, especially since it involved dressing up as ridiculously as possible and then getting together with twenty or thirty other people who all dressed as far out as possible, and then filming a party seen, a dance seen, and a fight seen in a dark basement. Not really something that I had on my resume before now. She said I should come though, so I did.

It ended up being quite a bit of fun, although I came away with some pretty serious carpet burns. I know that I'll end up being in at least several scenes of the final movie, which, from the looks of it is going to be quite the production.

I can't say at this point that it's a movie I'll want anyone to see or not (I've heard rumors that the college administration is upset about it), but at any rate, it was interesting, so I thought I'd blog about it.
Posted by Andrew at 3/28/2010 09:20:00 PM

it seems like you're trying to stay positive, which is good. I find myself in the numb or worse area a lot, but it helps to remember that when I align myself with God, He will give me the desires of my heart. I don't want to sound preachy or "oh knock it off", but I do want you to know I care.

stick it out, bro.

I hope the movies turn out well. That's fun. Post links if you get them.

Yes, if I get links, I'll post them, although I don't think either of them will be finished for a month or so yet.