After several attempts to get a ride to Walmart, I decided that it was time I actually walked down into Dayton. This is harder than it sounds, because there is a four lane interstate without any cross walks between Bryan Hill and the town. This had been enough to discourage me in the past, but I had been out of batteries for about two weeks now... so I guess desperate times call for desperate measures. 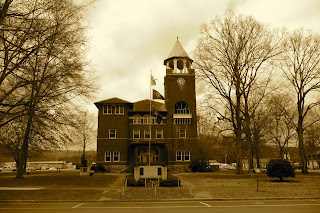 I took a few photos around the historic district. Here is the Rhea County Courthouse. It's claim to fame (along with the rest of Dayton and Bryan College for that matter) is that it was the site of the Scopes Monkey trial that paved the way for evolution to be taught in public schools. Despite what you might hear from either sides rhetoric or see in movies though, the reality is that the whole trial was really just a publicity stunt by the town of Dayton to try and encourage tourism and put there town on the map. Judging by the fact that Bryan College (named after William Jennings Bryan, the guy arguing against the evolutionists in the trial) was founded afterwords, and I came, and just spent three dollars and seventy cents on a latte at Jacob Meyers deli in Dayton... it would seem that they were somewhat successful.

Dayton is on a tributary of the Tennessee river, and there is a boat launch at the bottom of Bryan Hill, I think these are house boats or something like that: 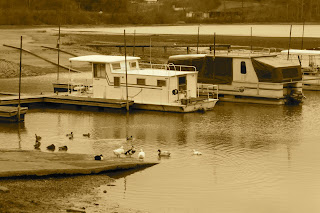 Love the name of this post-glad you survived the trip into town too.