People Are Much Easier To Hate (or love) In Person

Today was the final, and most star-studded day of CPAC 2010. We came in a little later than we had intended to and ended up listening to some lectures on foreign policy.

Next we heard Ann Coulter speak: 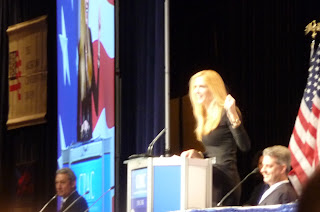 I had read one of her books several years ago and was looking forward to it. I recalled that she could be somewhat crude... but that did nothing to prepare me for her speech. Let's just say one of the girls I was with walked out in the middle. It ended up being more of a nightclub comedy routine. The question and answer session was redeeming though. She is probably one of the smartest people I've ever heard speak... or has a photographic memory or something, because she knows the names and current situations of even obscure local politicians that people brought up in examples.
Next Shannon and Olivia and I went to a session entitled "Why Real Conservatives Are Opposed To The War On Terror". This again highlighted for me the antithesis between the two sides of the Republican Party. It was a whole group of libertarian leaning conservatives who feel that the US shouldn't, at least under the current circumstances, have any military involvement overseas.
What's funny about the whole thing is that even though the libertarians decidedly a minority, they are so vocal that you would think the whole conference was about them. Just look at the straw poll: 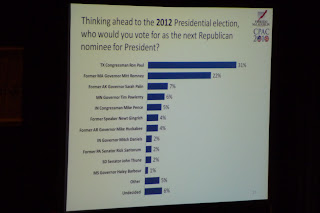 According to this poll taken of CPAC participants, Ron Paul will be the next Republican Nominee for 2012. When it was announced however, about three quarters of the room started booing and jeering. So I didn't need have taken Social Research Theory and Methods last semester (which I did) to tell you that the Libertarians had somehow disproportionally represented themselves in the poling.
Shannon and Olivia invited me to go to Alexandria with them, but I managed to convince them to wait to hear the Keynote speech from the one and only Glenn Beck: 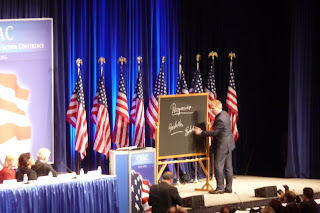 His speech was excellent, and none too kind to Republicans or Democrats, which in my opinion is a fine thing. The highlight for me, more than most of what he actually said though was the moment when they rolled his famous chalkboard out onstage.
The room was Marriott Ballroom was packed out. I was lucky to even get in after waiting about twenty minutes in line, and there was still a line stretching all the way to the other end of the hotel, and people being diverted to other conference rooms with video feeds. We left a few minutes before he finished to avoid the crowd, and as we went through the lobby, all the TV's were tuned to fox and there were crowds of people around them watching. 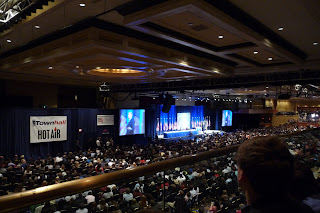 After fleeing the convention center and getting onto the metro, the fact that I hadn't eaten anything but smarties all day started to catch up to me. We still had a pretty long commute to Alexandria... which was complicated by the fact that Shannon and Olivia didn't really know where or why they wanted to go there. We ended up jumping on a bus that took us to "Old Town" which was cool. No sooner did we step off the bus and Olivia spotted a burger joint and the three of us without any discussion ran across the road and went it. It was great. I had a Cuban Burger which was a burger with a slab of pork on it, and ham, and some kind of jerk sauce. Definitely an improvement on smarties.
We asked the burger guys how far it was back to the metro. It was seven miles. We ended up finding out about a free trolley that went to the metro from Old Town. After waiting by the road at the stop for about fifteen minutes, the trolley finally came - and drove right past us without stopping. We ran a block ahead and I got almost to the door when it took off again. So we ran another block behind it. At the next intersection it stopped and took on a few passengers. Just as I got to it the doors closed again. This time however, I took what Olivia later said was a rather impressive leap across the snow bank and pounded on the door. So we got in and made it home. 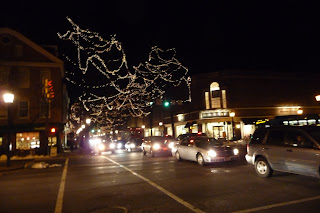 It's hard to believe that tomorrow I'll be headed back to Bryan. So much stuff happened in the last few days that I feel different. I definitely have a greater appreciation of what politics and the media is like. I've learned several things. One, I've learned that people are a lot easier to hate in person than they are on a TV screen. I've also started to see why a lot of people hate Washington, and everyone hear. At the same time though, I think I feel what so many people find attractive about it; all the excitement, the atmosphere of things happening and media people rushing around. So even though it probably isn't good for my blood pressure, I would really like to spend some more time here.
Posted by Andrew at 2/20/2010 10:47:00 PM

Sounds like the event threw you somewhat off-kilter but I am glad you achieved equilibrium, once again, with a burger. (Let's hear it for Cuba!!!) Would have LOVED to see your mad dashes after the trolley and the giant leap!