I think at this conference I have begun to see something that I had only sensed before. There is a big, and probably dangerous divide in the Republican Party. On one side you have the old Bush Neoconservatives, and on the other an ever growing Libertarian leaning group. There is an audible, visible tension between them here. It seems strange to me that they are both together, at one convention, in one party, when on many issues like foreign policy and national security they differ more from than they do from liberals!
I had an extremely full day today... and am too tired now to even begin to describe all of it in any of the detail it deserves. Here is the basic gist though.
We road the metro in and listened to a panel discussion on Jihad. Next we listened to a debate over national security vs. freedom.
Then, in the last session, we heard Ron Paul Speak. Both the debate and the Ron Paul speech got, dare I say, out of hand. John Ashcroft got yelled at during the debate, and in the lead in the session that basically introduced Ron Paul one of the student speakers got booed off the stage for making a remark against CPAC allowing the gay rights group GoPride to attend.
The Ron Paul speech was like everything I have ever heard about... like a rock concert. You can't imagine how impassioned people get during his rallies. He is definitely the most enthusiastically supported politician I have ever seen, and yet ironically no one would ever vote him into office. 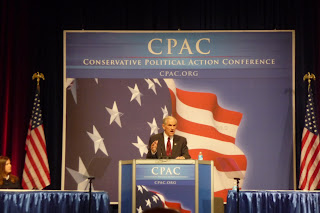 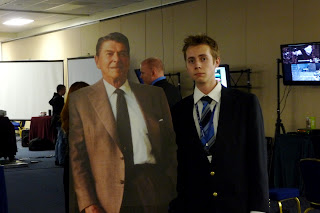 After the conference was over some friends and I took the metro to the Mall. It was covered in snow and we were the only people of the whole thing. Here we are standing at the base of the Washington Monument: 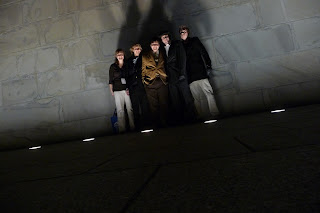 Later on we went to the Lincoln Memorial, and then back to the conference to get some air mattresses we had left there. After riding the metro back to our parking garage, we ended up getting lost, didn't get back to our host home until late.
Posted by Andrew at 2/20/2010 01:33:00 AM