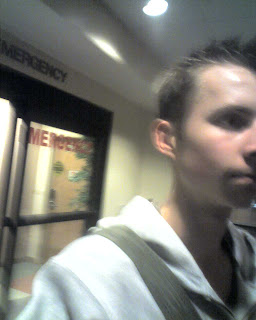 Last night I had a really, really strange experience.

It was open dorm night, and Cami had invited a number of people over to the 4th floor lounge in Robertson to watch a movie. Afterwords, we sat around talking, and Bryan and Lauren and Ryan and I ended up reminiscing about Italy. Ryan had just had the bug that had been going around campus, and didn't look all that great. The guy sitting next to me also remarked on how he looked, and said he almost wished he would just get it so that he could stop worrying about it. And this is why I am always careful what I wish for.

After about twenty minutes of talking, some people, including the guy I was next to, got up and took the elevator downstairs to leave. About two minutes after that, a girl came running back up the stairs and said that as they were getting out of the elevator, the guy had just collapsed and gone unconscious. We all ran down the stairs, and sure enough, he was lying on his side, with a significant amount of blood splattered on the floor around his head.

Fortunately, my friend Bryan who I traveled in Italy with was there, and took control of the situation, getting the guy a pillow and making sure he didn't try to roll over and calling his Dad, who's a doctor, while some of the girls called 911. The strangeness was only beginning though.

As we waited for the ambulance to arrive, another guy went to the front door to make sure the paramedics knew where to come in. All of a sudden, he just fell over backwards, half in the door and half outside and didn't move. We carefully pulled him inside, and put a blanket on him too. At this point we decided that everyone should probably sit down in order to avoid getting hurt if they suddenly inexplicably passed out (that sounds kind of obsessive as I write it now, but at the time it seemed like the only logical thing to do, and everyone did).

It seemed almost like something from a horror movies or something... and flue going around on a college campus, and suddenly it turns into something worse and in the middle of the night people start falling over and going unconscious.... Anyhow, when the medics arrived, the girls thought that Bryan should follow them to the hospital in case the guy who got injured needed something. Bryan agreed, but he asked me to come with him, because he was feeling a little weird (not to mention we were all still paranoid that we might be the next person to go down).

It was kind of funny, because Bryan and I had been planning on hanging out some time, but, as I told him later, I wasn't planning on doing it in these circumstances! We ended up waiting in the ER for an hour or two until two of the guys friends got there. So we were able to catch up with some of what had happened in our lives since Italy, even if it was a somewhat strange situation.

As of when we left, it sounded like the guys injury wasn't that bad, and they had both just coincidentally fainted because they had the stomach bug.

Thanks for the update and given the circumstances it was probably a really good idea to sit down at the time! :)Stay well.