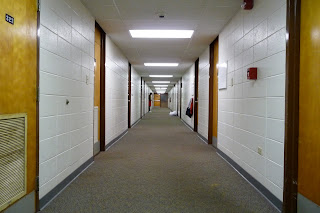 Shortly after my last post in which I talked about taking someone who was sick to the hospital, I myself became quite ill. It was last Sunday that it started. I woke up feeling less than good. However, I'd promised my friend Abram I would go to church with him in Chattanooga, and so I did. It was a beautiful building, high up on top of a steep, boulder strewn mountain overlooking the city (although that morning it was rainy and thus not overlooking anything but fog). The church itself was one of the most imposingly beautiful buildings I've ever been in (this side of the Atlantic at least). It was a sprawling structure all made of thick stone with beautiful landscaping and a carved oak interior. It was apparently a rather affluent community. I guess could be for this reason that it all felt strangely alien me. Or maybe the fact that it has been so many years since I actually went to a church-church.

Anyhow, by that night I had a fever and chills and just felt crummy all the way around. My roommate had left for the weekend, which was probably a good thing for both of us, so I just slept for a long time... well into the morning of MLK day.

I woke up to find that everyone had left for the 'Bryan College MLK Community Service Day'... which I had not signed up for as I had just arrived. Seeing as I was sick, I didn't really care because I probably couldn't have gone anyhow. What did bother me was the fact that the cafeteria was not serving breakfast. I went back to my dorm and bought a poptart from the vending machine. A few hours later, I found out that the caf was not open for lunch either.... so I ended up going 24 hours on only a poptart and a rice crispy bar. At one point I tried walking down into Dayton, but I realized that the way I had gone I would probably have to cross a freeway, and I was still feeling pretty weak, so I just went back to my dorm again.

So the week started a little bit rough. It got better though. On Tuesday my books arrived, which was a relief. Yesterday I took a challenge test to try and get out of being forced to tak remedial math for the second time in my college career. It was so stressful that I went out and ran four miles immediately afterword... the farthest I've gone since summer. And today, I got word that I passed the test, and will not be forced to endure two hours a week of torture + the $125 text book. And I got into a class with Palmer, in which I will do very little but watch interesting movies. So that's all almost makes up for spending Martin Luther King day in a state of sickness and malnutrition.... which really doesn't even qualify as either compared to what people are going through in Haiti right now.

I felt compelled last night to get in touch with Ange, a friend of mine from Mansfield. While taking a course few semesters ago called Medicine In Society in which we read Mountains Beyond Mountains, a book about Paul Farmers humanitarian work in Haiti, I learned that Ange was in fact Haitian, and her family had emigrated relatively recently. I hadn't spoken with her since sometime last semester, but I just felt like I should ask how her family was doing. She replied that while they were mostly alive, they were reduced to living on the streets, and some people on her Mom's side were unaccounted for completely. So, along with the Haiti in general, if you could pray for Ange's family specifically it would be great.
Posted by Andrew at 1/21/2010 11:13:00 PM

Anonymous said...
This comment has been removed by a blog administrator.
12:36 AM