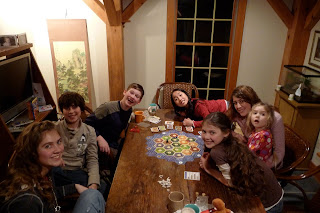 Above is pictured last night's New Years Eve celebration at our house with long time friends, the Spanos. It was a good time.

I can remember back in the 90's thinking: "Wow, someday it's going to be the year 2000." A New Millennium (yes-yes, it really was 2001). Now we are a whole decade in! Hard to believe! I don't know if it really feels like ten years. But then, I haven't lived through too many periods of ten years to really be an authority on the subject. Maybe it feels like longer.

What are we going to call this decade? We still haven't reached a consensus on what to call this past decade yet! I have no idea for that one, but this one I think should be the tweens, for 'twenty' and 'teen'. I have to tell you though, I'm psyched about the next decade ten years from now. It will be the roaring 20's again! If I'm alive and Western civilzation persists, I am totally throwing a Great Gatsby themed party, replete with 20's garb, decor, and lot's of bootlegged cocktail drinks! And you are invited! Yes. You, right there in front of the computer screen.

For now though, we shall have to survive the tweens. And if you think of all the crazy stuff that happened in the last decade, I'm fairly confident that it won't be boring.