Currywurst - I Ate It

Today on BBCnews.com, I stumbled across a headline video about Germany's current culinary obsession: currywurst. I was delighted then, that when I was in Villach Austria this past April, I actually had some.

We (Connor, Nicole, Mary and I) had just gone for a long walk, and coming back toward the center of the city, we found a little cart down by the river. It looked like one that you would expect to be selling hotdogs in the U.S, but this was Austria, so of course, they were selling bratwurst; prepared in more ways than I ever imagined possible. Connor is a vegetarian, so it didn't do him too much good, but Mary and I went down and ordered. Out of all the different variations of wurst on the menu, currywurst stuck out to me. It was good. Basically just bratwurst in a thick curry sauce. So I was surprised this morning, to find that it is now apparently something of a cultural icon for the German speaking nations of the world. And I ate it. 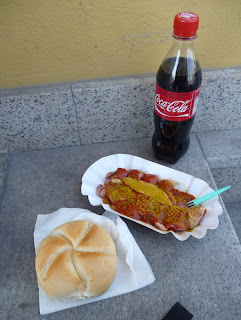 way to be ahead of the time, Drew.