This past Sunday I went to yet another party. This one was in Corning, held by some friends at the Church I used to be a part of there. It was an It's A Wonderful Life themed Christmas party, and so everyone was expected to wear black and white. It ended up looking pretty sweet, and there was opportunity for a few good pictures. 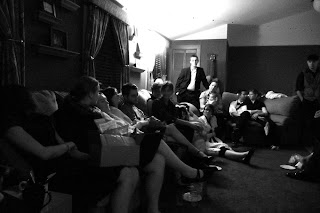 I met a lot of people that I hadn't seen, let alone talked to, in at least a couple years. It was good to catch up with them and also to meet some new people who are attending now. One of them, Tim. 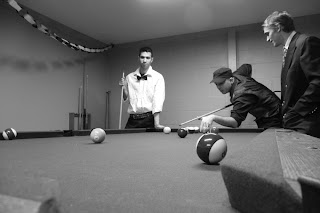 After the party I went to the Jeror's house for the after party, and ended up playing guitar hero for the first time ever (hey, I've been a real guitar hero before). 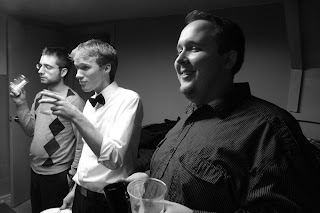 So that was a lot of fun. I ended up at the Jeror's again the night before last because they had invited my whole family up for supper. They took us all out to Wegmans for gelato afterwords, and the little girls (and Derrick for a minute) ended up dancing on the floor after the store people put the tables away for the night.

Last night was our families traditional "soup night" when my grandma makes soup for everyone. This time was a little bigger than usual, as the Efthimiou's are back up from Florida for Rachael's graduation.

My cousin Chris and his wife Sarah were also back from Carolina, where he is in Navy sub engineering training. It's funny to hear him actually doing a lot of the things that we talked about or pretended to do when we were little kids.