Well... you know, I don't really believe in Halloween, and I haven't actually done dressed up or done anything to celebrate it since I was about five years old (when I dressed up as a chef or cowboy or pumpkin or all of those things). The other night though, I was invited to a halloween party with some people from my department at school, and I decided to go, at least to hang out with them. I ended up dressing up as Neo... the star of one of my favorite movies of all time: 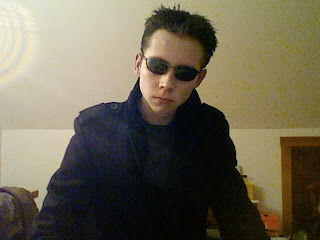 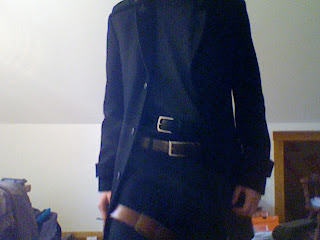 We ended up playing monopoly. It was the first time in a long time that I've done that, and as usual, we didn't finish. Still, it took a few hours, and I didn't make it home until about three in the morning, which was not fun... but I had a good time, so that was cool.

Last night was the time change (if you didn't realize that, the congratulations, you just gained an hour!). I was kind of exited that I was going to sleep an extra hour, but then, I stayed up past midnight, and all my clocks now change automatically (I forgot they do that). So basically, my alarm woke me up at 9:00am... and I was exited because I figured that since I hadn't set it back it would really be 8 when I went over to the house... but alas... it changed automatically and when I thought I had gone to bed at midnight, it was really 1:00am old time, and when I thought I was waking up at 8 new time, I was really waking up at 9 new time, and ten old time... that was frustrating, and kind of stupid on my part, all despite the fact that it was really almost completely meaningless.

So, did you do anything for a Halloween this year?

I think I went to bed an hour early, actually. That was surprising. I had a concert early in the morning the next day.

I'm still getting hungry an hour early, though.

Hey, did your Dad and bro's get anything hunting?

I LOOOOOOOOOOOOVE Neo's wardrobe. I am intensely jealous!