This is a video Chad and Connor (two of my mates from Saints Bible Institute) and I made as a joke for our graduation ceremony (it's tradition there to have a sort of talent show afterwords). So this was filmed on one of the last days we spent together in Italy. I have had tons of problems posting this video online since it has a song in it, and the powers that be have been cracking down really hard on that recently. I first put it on facebook, but they deleted it, and threatened to ban me. Now it's on Youtube, and they agreed to let it stay as long as an add for the song can appear on it... so if you are watching this in the future and the link doesn't work, it will likely be because they've changed their policy.


Note, the florescent vests we are wearing are from the school. They were always trying to get us to where them whenever we went out on the road at night, and we thought it looked so dumb we started joking that we might as well take our shirts off and walk into a bar wearing just the vests. We didn't but, they video is sort of a joke on it.
Posted by Andrew at 10/22/2009 11:48:00 PM 1 comment:

Hay Rides, Bonfires, Corn Mazes and Slamming a Deer With Your Car

It has been a beautiful Fall this year. Aside from a freak snow storm that left everything covered in three inches of whiteness, we were able to observe the changing colors in glorious sunny weather. It's just about over now, but here is a picture I took on a walk with my Mom last week: 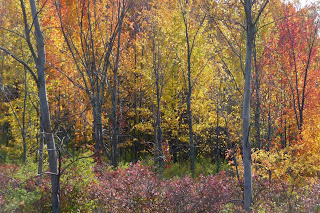 Last weekend, I did all sorts of "autumnal" things, from going up to the Finger Lakes region with my friends and cousin to do a corn maze, to a late night hay ride with friends from the home fellowship we attend occasionally. After the hay ride there was a big bonfire, and we drank tea and hot coco... so that was really chill. Here is Chandra and the fire: 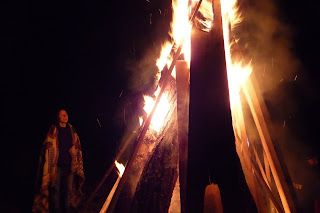 On the way back from the Markell's who hosted the event, I culminated the Fall experience by hitting a deer (well, actually it's debatable who hit who, I would tend to think the deer hit me). I swerved and managed to slow down to the low twenties before impact and got of with only a small dent in my fender.

As I mentioned before, it snowed a couple days ago, which is unusual. Typically that doesn't happen till at least a couple weeks after the leaves are gone. Some are taking this as a sign that the predictions this winter will be an epic one are true. I'll just wait and see though.

Two of my cousins, Daniel and Anna, that I helped move to Florida a couple months ago are up visiting for the weekend. Tomorrow I'll go hunting with Daniel. I'm exited now, because I just looked at my PA Hunting Trapping Digest, and ruff-necked-grouse season just opened. I've always wanted to get a grouse, but they are tricky birds. They are almost invisible when still, and when they take off all of a sudden, it sounds like a plane flying past you, and you have about two seconds to shoot at them before they are gone. If anything interesting happens I'll post about it.
Posted by Andrew at 10/18/2009 11:18:00 PM No comments:

Climate Change - We Should Prepare To Adapt

Well, I have to say that I was a little disappointed when I heard that this year's Blog Action Day was voted "overwhelmingly" to be devoted to climate change. It seems to me like there are many issues out there that we have far more ability to control that could be discussed. Still, I respect what Blog Action Day stands for, and I do believe that climate change is a significant issue... just not in the way that most people have now been taught to believe.

It is a fact that our earth's temperature is rising. It is a fact that this could have major consequences for our environment ranging from crop production to ocean levels. Another fact, one that is seldom talked about, is that the earths climate is constantly changing, and has been doing so for eons of time before humans first harnessed fire and artificially released CO2 into the atmosphere - let alone drove the first gas guzzling SUV. The earths geological history is full of periods of dramatic global cooling (what we call: "Ice Ages") and warming.* The last ice age that our planet experienced was actually in the late middle-ages** and stretched on until around the founding of the United States (notice the ice blocks in the painting of Washington Crossing the Delaware by Emanuel Leutze; the Delaware has never been known to freeze in recent history). This "little ice age" ended in the 1800's, which means that since then, the earth has essentially been in a stage of "global warming". All this without the aid of fossil fuels.

Now that I've vented my skepticism toward our ability to start climate change (and therefore our ability to stop it) I'd like to again recognize that it is a reality, and say that I think it's important to think about, and prepare for.

Preparedness should be our main concern. If the current trend of global warming and subsequent rising ocean levels continues, it is going to put nations with a lot of coastline in a very bad way. Many of these nations are highly impoverished and will likely be unable to deal with the humanitarian crisis or thousands or millions of people being displaced. A plan should be put into place to deal with this situation now, before it occurs.

The other chief concern should be agriculture. If climate zones change, then crops that grew well in one area may suddenly find their ideal habitat has moved North or South. Farmers will need to be prepared to adapt to the new environment. Given the huge scale and factory orientation of most farms today, such a change may prove difficult for farmers to finance on there own, and the government should plan on assisting in the change, as well as provide expert advice and counseling on what steps should be taken.

While climate change in the past may have altered human history, it has never seriously threatened our survival as people. This has been because we adapted to it; not because we tried to stop it. Preparation to adapt should be our primary concern with regards to climate change.

Chariots of the Gods

I've been learning a lot about the prehistory of Mesoamerica (Mexico, Central America and such) in my Mesoamerican Anthropology class. While archaeologists may not be sure about the whole story, one point that was hit on again and again is that aliens had nothing to do with it. That's right aliens are not responsible for the massive architectural and scientific achievements of the ancient Aztecs, Mixtecs, Mayas, Olmecs or Teltecs. Nor was it aliens, the Illuminati, Atlantian refugees or lost tribes of Israelites. While most of the these beliefs have gone out of fashion (or were never that widely adhered to in the first place) the alien one seems particularly persistent. This may be due in part to the 70's book and TV series Chariots of the Gods by Erich von Däniken. All this to say, that was the inspiration for my most recent attempt at 3D animation using blender. Enjoy: