Yesterday I had only on class and spent the rest of the day between the campus organizational fair, a meeting for social science club, practice for worship at Navigators and finally Navigators itself. It was beautiful on campus today, and they have been making a lot of cosmetic improvements lately, so it's actually starting to look really nice. All of this however has my adviser annoyed, as he told me today, the college leaders are complaining about a budget deficit and cutting their travel funds, all while buying $6000 flag poles, and letting the lights stay on all night in buildings, the cost of which he and another prof from my department estimated to cost around$4500 a month each. Below is North Hall Library, arguably the coolest building on campus: 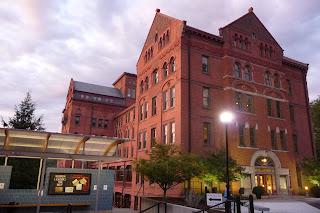 Here is a shot of the organizational fair: 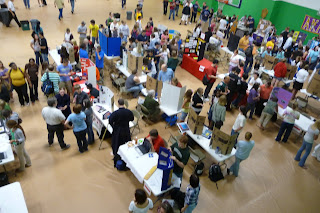 I've been enjoying my Mesoamerican Anthropology class. We've been learning about the very first inhabitants of America, and the rock shelters that they often lived in, one of which was actually here in PA. I actually know of a rock shelter about a mile from my house, and think I will probably walk there today and check it out, and although I don't have particularly great expectations of finding any prehistoric remains from Clovis people, I will at least take a few pictures and maybe post about it.

My Dad's still suffering from paralysis of the vocal cords, but they are pretty certain now that it is neither cancer or stroke that done it (to use English incorrectly as it is by English people themselves). He is actually going to a business meeting today, believe it or not... so that's good I guess.
Posted by Andrew at 9/11/2009 11:37:00 AM

I'm praying for both you and your family this week. Just thought I'd let you know. :-)

And I want to see that rock shelter next time I'm up there, okay?!

Sure, it's only about half a mile from my house, and you can even drive most of the way, so remind me then : )